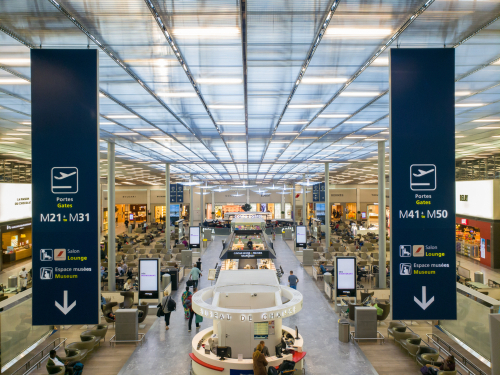 Belgium (Brussels Morning Newspaper) Ground personnel strikes at Paris’ Charles de Gaulle (CDG) airport caused severe service disruptions on Thursday, with some 10% of all departing flights cancelled, while the airport operator Aéroports de Paris (ADP) warned disruption could be even worse on Friday as more unions join in the strike.

The Paris CDG airport is among the ten busiest in the world and second busiest in Europe, serving up to half a million aircraft each year. The ADP staff strike on Thursday will be joined by a number of other unions on Friday, including staff working for airlines operating flights out of CDG, subcontractors and other related companies.

The announced expansion of the strike caused the French aviation authority, the Direction générale de l’aviation civile (DGAC), to instruct airlines to cancel one in six flights leaving CDG on Friday, in order to cope with the strike. In addition, the unions are planning demonstrations around the airport, expected to start early morning and last until around midday on Friday.

The striking unions are calling for a blanket 10-percent pay rise, according to Fabrice Criquet, a representative of Force Ouvrière (FO), one of the five major French union confederations. ADP is currently offering a 1.5-percent increase. “Management made us sign an agreement reducing our salaries by 5% during Covid, in addition to the more than 1,150 redundancies,” said Criquet. “It is no longer tenable today, especially with the inflation which is impacting us all.”

The French airport workers’ protest is part of a wider issue impacting the European – and global – air industry, which is currently suffering from a severe labour shortage. Several European airlines and airports have faced employees’ strikes in recent weeks, hinting at more travel disruptions in the coming months. With ongoing staff shortages and rising travel demand, the unions are using the opportunity to push for higher wages and improved working conditions, after many airlines and airports were forced to furlough or lay off workers and cut their pay during the height of the Coronavirus pandemic.

Most recent walk-out happened by Ryanair cabin crew, with some employees joining in the strike in Belgium, Spain and Portugal last Friday, also calling for increased pay and improved working conditions. Ryanair claimed it had negotiated labour agreements covering as much as 90% of its staff across Europe, and the company stressed that it did not expect widespread disruption this tourist season.

Before the Ryanair strike, pilots and cabin crew unions of Brussels Airlines started a strike on 23 June, planning the disruption to coincide with a summit of EU leaders which was held in Brussels on that date.