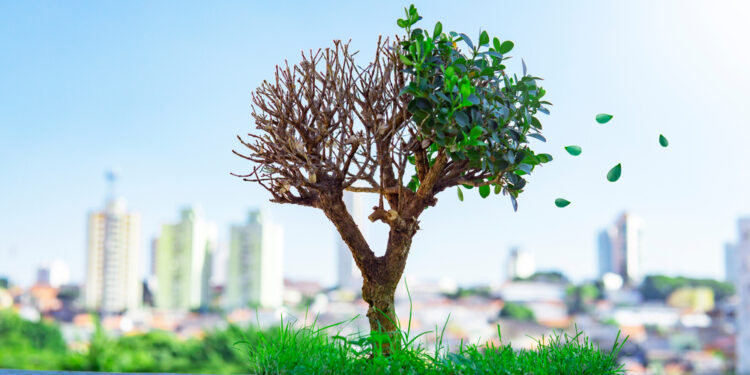 Brussels, (Brussels Morning)-  Several trees in the Forest Parks – especially Duden Park, Forest Abbey Park and Forest Park – are currently showing serious signs of weakening. “Climate change is clearly the cause of this,” it says in a press release from the municipality.

The parks in Brussels are suffering from the drought. Some trees started losing their leaves last month , others need to be pruned or even cut down for safety reasons.

At the beginning of this week, a 120-year-old ash tree in the park of the Abbey of Forest had to be drastically pruned and the area at its base had to be secured with post fences to prevent accidents if part of the tree fell.

A parasite, the haplopore, was found at the base of the tree. The risk of fracture due to this fungus is real and, according to those in the know, a solution should be found quickly.

Not an isolated case

According to the BRUZZ, this is not an isolated case. Another tree, also in the gardens of the Abbey, a large maple tree, had to be fenced, partly because it is affected by a fungus that causes wood rot, but also shows signs of rot and cracks at the base of the trunk.

Recently, two trees in the Duden Park fell on the road and on Wednesday five poplars had to be felled on the edge of the playground at the Abbey.

Radical solutions such as felling trees are not taken lightly, but are necessary for everyone’s safety.

“In the plans for the redevelopment of green spaces, we are calling for the introduction of new species that are more resistant to periods of intense drought,” said Alain Mugabo, Alderman for Green Spaces in the press release.

The mayor of Forest, Mariam El Hamidine (Ecolo), is also concerned about the condition of the trees. “This reminds us – to the extent that we still need to – that we urgently need to take action for the climate,” said the mayor.