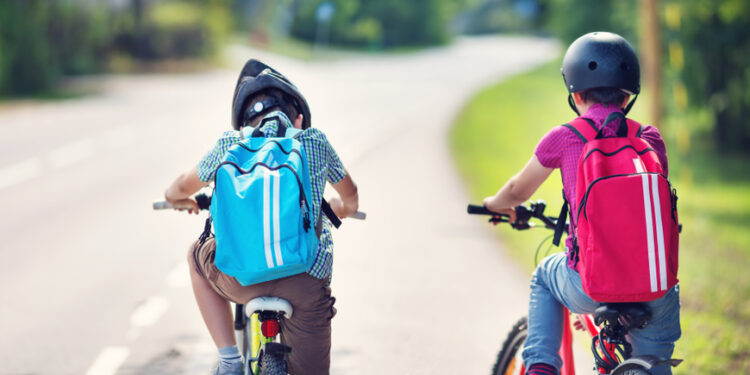 Brussels, (Brussels Morning)- Most of the Brussels schools noticed only a slight increase in the number of cycling students this year. “Yet there is a very big difference from a few years ago.” Raising awareness in the schools and the new circulation plans seem to be gradually bearing fruit.

The Sint-Jan Berchmanscollege is located in the pentagon, where the new circulation plan entered. The college is also close to the construction of the new metro line, which also makes passage more difficult for cars.

“The bicycle shed is pretty full and compared to a few years ago I see a substantial increase,” says teacher Bjorn Lambrecht of the college, to a BRUZZ reporter. “I also come by bike and I notice that it is calmer today. Of course, it’s only September 1, so it’s too early to draw any conclusions.”

The Annunciation School is another school in the pentagon. “Usually everyone comes here by bike,” says Kristof Danhieux, director of the MABO. “Only a dozen parents come by car.” But this, he says, is due to the enrollment policy, where people who live close to the school are given priority to enrol.

The MABO also has a parent committee that is consciously involved in low-traffic neighbourhoods. A member of that committee is the architect Annekatrien Verdickt of Filter Café Filtré , the citizens’ movement that campaigns against air pollution at school gates. “Their initiative actually originated in our school,” says Kristof Danhieux.

Not only an increase in the number of cyclists, but also more pedestrians and an increase in the use of public transport were noticed today. Moreover, most schools seem to be consciously engaged in sensitising students about the environment.

For example, the Leo XIII school in Neder-Over-Heembeek has a week devoted to pedestrians, the scooter, bicycle and public transport. This coincides with Mobility Week. “We do feel that parents are doing their best not to use a car, if the distance allows it.”

However, not everyone is convinced. “It is unfortunate to see that some circulation plans have already been reversed,” said local resident in Cureghem Daniel Tanahatoe . “Certainly, for many motorists it takes some getting used to, but in the end the city will benefit from it. This will provide more space for pedestrians, cyclists and public transport. And also less noise and air pollution.”

According to Thomas Deweer of the Fietsersbond, there are more parents with cargo bikes or attachments on their bicycles. But many parents are still hesitating about letting children drive independently because of the dangerous traffic. “Of course they have a point,” says Thomas Deweer. “There are certainly still a number of work areas regarding safety in Brussels.”

The Cyclists’ Union regularly organises initiatives aimed at raising awareness. “If it is safe for children to cycle to school, then it is safe for everyone. That is really our goal,” says Deweer. For example, there is the Kidical Mass . These are bicycle tours for children at various locations in Brussels.