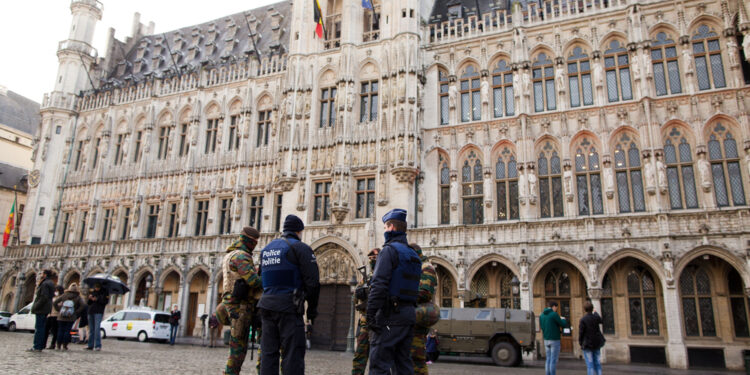 Brussels, (Brussels Morning)- The Brussels police are demanding moral compensation of 2,000 euros against a man in his thirties who threw a stone at law enforcement during the corona demonstration on 21 November. The public prosecutor also demands another 14 months in prison against the rioter, who does not dispute the facts.

On November 21, 2021, thousands of people came to Brussels to demonstrate against the corona measures. After the demonstration, there were riots, during which the police were pelted. Images of the rioters were taken and they were subsequently distributed by the media at the request of the public prosecutor with the aim of identifying the perpetrators.

“The defendant recognized himself in the images and subsequently turned himself in to the police, with the assistance of his lawyer,” said deputy prosecutor Willemien Baert at the hearing of the criminal court on Tuesday afternoon. “The footage shows him throwing a large stone at the riot police who formed a line to stop the demonstrators. One of the police officers had to step back to avoid being hit.”

According to BRUZZ, the public prosecutor is demanding 14 months in prison against the 37-year-old man from Celles, who was already convicted in 2007 for inconsistency and who came into contact with the police several times in the period 2003-2007 for offences of assault and battery. “These are facts from a period in which my client was going through a difficult period on a family and social level,” argued lawyer Elisabeth Vanpeteghem. “He has since recovered his life and was not in contact with the court until last year.”

Counsel for the Brussels police asks the court to award the corps a provisional material compensation of 1 euro, but also demands moral compensation of 2,000 euros. “We cannot yet put an exact amount on the total damage caused by the demonstration,” said Master Panayiotis Alexandris. “A number of expertises are still ongoing. But the police force has also suffered image damage as a result of these facts.”

‘Nothing or no one hit’

The defense opposed the compensation in its plea. “Without this one stone that my client has thrown, the damage to the police would have been just as great, because my client did not hit anything or anyone,” said Vanpeteghem. “There is no causal relationship between the facts and the damage.”

The lawyer also asked the court not to sentence the defendant to an effective prison sentence, but argued for an autonomous probation sentence or a sentence with a postponement under certain conditions. “That is no laughing matter, because then you are permanently under the control of the justice assistant. That way my client can work on his aggression and alcohol problems.”