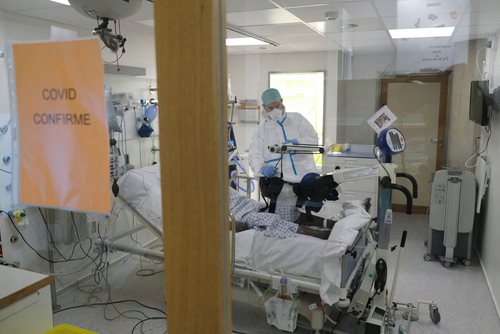 A patient is seen in the intensive care unit for the coronavirus disease (COVID-19) at the CHU de Liege hospital, in Liege, Belgium May 5, 2020.

Brussels (Brussels Morning) The healthcare sector, in consultation with Federal Minister of Health Frank Vandenbroucke, is preparing an emergency plan with different phases. In this way it is hoped to be somewhat prepared for the omikron wave in hospitals. Margot Cloet, the top woman of the Zorgnet-Icuro care umbrella, calls on you not to lose any time. “The peak in hospital admissions is expected within two weeks, so we should start scaling down considerably next week.”

According to BRUZZ, Virologist Steven Van Gucht announced on Thursday, after the Consultation Committee, that the health institute Sciensano expects a peak in the number of hospital admissions by the end of January of 400 to 1,300 per day.

That is why Cloet repeats her call for a political guidelines framework that must also be communicated very clearly to the population. “In this way there is an unambiguous way in which decisions are made, although in the end it remains the doctor who remains liable,” says Cloet.

In any case, there is no longer much scope for the workforce, because hospitals are already confronted with a large dropout. “In addition, it is also not the case that trucks with personnel can still be driven in, because all options are as good as exhausted,” emphasizes Cloet.

According to the top woman of Zorgnet-Icuro, there is therefore no time to lose. The emergency plan should therefore already be drawn up before the next Consultation Committee, although Cloet hopes that the worst-case scenario will ultimately not become a reality.

De Croo is looking into it

Prime Minister Alexander De Croo is now looking at ‘business continuity’ together with the Ministers of Work, Health, the Self-Employed and the Interior. The employers and the National Crisis Center are also sitting around the table. Those talks will continue in the coming days. Together they want to ensure proper monitoring of absences and updating the continuity plans that the companies are already working on. The intention is that the Group of Ten, together with the government, will soon look into the problem.