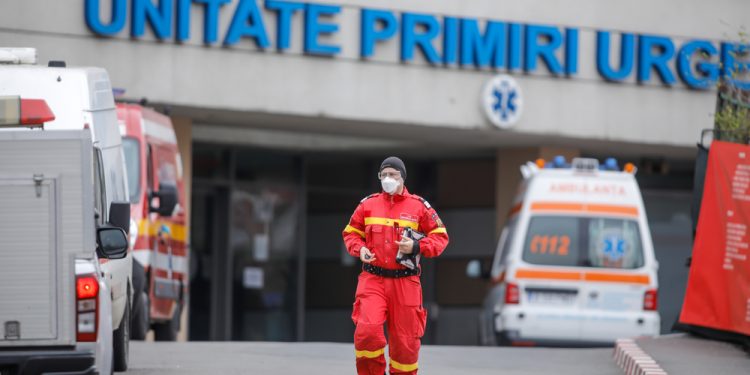 Brussels (Brussels Morning) Medical workers in Romania are overworked and stretched too thin, a result of the coronavirus pandemic plus the effects of longstanding emigration by the country’s qualified doctors. Approximately one-third of Romanian doctors are working abroad, the highest percentage in the world, according to a Deutsche Welle report on Sunday.

The DW report cites numerous doctors’ accounts of chaos, mismanagement, corruption and lack of protective measures in the healthcare system. Most of the masks available in the Fundeni Clinical Institute in Bucharest, for instance, are intended for use in construction, and not for medical use.

The head of the Institute’s department for Anaesthesia and Intensive Care Medicine, Dr. Dana Tomescu, complained that the people on the streets are better protected than the medical staff. Tomescu declared that while she was prepared to save people’s lives, she didn’t expect to have to risk her own life while doing it.

Romania’s death rate from coronavirus is among the highest in Europe, a toll that also includes healthcare workers. In early December, the medical personnel union Solidaritatea Sanitara reported an average of 6.8 deaths per 1,000 infections in the medical professions, a higher rate of deaths compared to people of the same age in different professions.

The Romanian healthcare system was struggling even before the coronavirus pandemic. It was suffering from chronic underfunding at between 5% and 6% of Romania’s GDP, which is around half the EU average. However, even with donations helping clinics to increase their capacity, another, more serious problem remains – there is not enough staff available.

According to an OECD study published in May 2020, around one-third of Romanian-trained doctors are currently working abroad. Romania thus tops the global list of countries suffering from an exodus of hospital medical personnel. Next come Zimbabwe, Belize and the Dominican Republic. The German Medical Association figures from 2019 show that the majority of foreign doctors working in Germany came from Romania.
“It’s not beds that treat the patients”, one doctor told DW. “You can set up 7,000 new ICU beds, and still not solve the problem, because there aren’t enough doctors, nurses or carers to look after these intensive care patients. The doctors have left the country”, he said.