by Jack Gaioni
in World 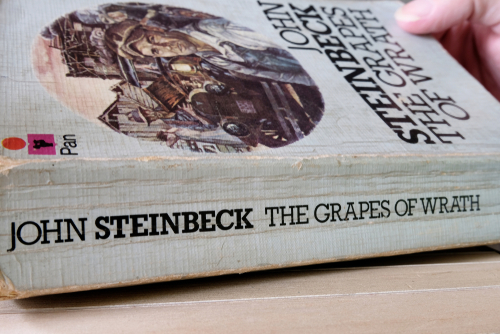 Subang Jaya, Malaysia - November 17, 2019: Hand opening the book by John Steinbeck, The Grapes of Wrath. Set during the Great Depression, the novel tells about the hardship faced by the Joads family.

“An unprovoked attack…a refugee crisis…. enemy occupation … war crimes…a blurring of loyalties…works of propaganda…resistance movements…”
Sound familiar? Chances are you’ve identified these catchphrases with the news coming out of Ukraine. Totally understandable. You might be surprised to learn that there is a Belgian link here between this phraseology and one of America’s most beloved and honored authors—John Steinbeck

Belgium, (Brussels Morning Newspaper) If you are familiar with the name John Steinbeck you are probably thinking pure Americana. This giant in America’s arts and letters was a Pulitzer Prize winner (1940), and later won the Nobel prize for literature in 1962. With the outbreak of World War II, John Steinbeck was a world-renowned author having been published in over 50 languages. Steinbeck’s body of work (e.g., The Grapes of Wrath, Of Mice and Men, etc.) has been described as “deeply empathetic to humans with a keen social perception for those oppressed”. This article directs your attention to the little-known backstory of how events in wartime in Belgium influenced his literature AND conversely, how Steinbeck’s writing in turn, would influence events in Belgium. Consider…

In the 90 days from April to June of 1940, Hitler’s Germany had invaded, and subsequently occupied the nations of Norway, The Netherlands, Denmark, Belgium, and France. His actions were swift, unprovoked, and brutal. The world began to take notice. As America pondered its involvement in the nightmare of World War II, Steinbeck was asked by President Franklin Roosevelt to write some much needed, new, and fresh ideas to “heighten the civilian morale for the American public. Steinbeck considered himself a patriot and enthusiastically complied to Roosevelt’s plea. Rather than write straight “propaganda” which he considered “comically overstated”, Steinbeck chose to author a fictional account.

He wrote a 100-page novella titled: The Moon is Down. The setting was an unnamed county, occupied by an unnamed invader. In his research, Steinbeck interviewed displaced people from the aforementioned occupied countries of Europe—among them, many Belgians. He was gripped by accounts of individuals who resisted and refused to admit defeat. The refugees intrigued Steinbeck with their heroic stories of forming underground movements in their occupied countries. He was fascinated by “the experience of victim nations, their national psychologies, their resistance, and their confusion.” At the same time, Steinbeck also acknowledged the existence of internal spies, turncoats, enemy collaborators, and those who saw the enemy occupation as an opportunity for profit and advancement. Conversely, he did not hesitate to infuse his fiction with accounts of the harsh demands of the occupiers, not ignoring their brutality and savage punishments inflicted on those natives of the victim nations. Interestingly, he also “humanized “the enemy, portraying them as human beings with normal feelings. In short, Steinbeck was more interested in literature that depicted the universality of human nature rather than “good guy versus bad guy” propaganda.

Upon publication (1942), The Moon Is Down was highly criticized in the United States. High governmental officials claimed the novella was a fairy tale, pollyannaish, naïve, and too sympathetic to the invading Germans. On the flip side, he was accused of being overly critical of those who were victimized. Steinbeck countered by exclaiming that his work should be judged on its literary merits not viewed as “overcooked and absurdly exaggerated propaganda” (his words).

In 1940 Belgium certainly qualified as one of Steinbeck’s victim nations”. The German invasion of Belgium—known as The 18 Days of Fighting” — ended with the country placed under German military occupation. Resistance networks began shortly thereafter. At first, most of the resistance in occupied Belgium was non-violent. Covertly listening to foreign broadcast (from London), acts of civil disobedience, labor strikes and spying were somewhat benign. Active resistance developed in earnest in 1941 and took several directions. Sabotage, armed resistance, assassinations, and more sophisticated espionage followed shortly thereafter. Perhaps the most effective counter to the German occupation was the activity of the Belgian clandestine press.

The underground press flourished in Belgium after the occupation and within 6 months of the invasion, 8 newspapers were echoing active resistance voices. Much of the resistance focused around producing newspapers in the French and Dutch languages as alternatives to the collaborating newspapers. La Libre Belgique for example was relaying news faster than the BBC French language broadcasts and reached a circulation of over 70,000 copies. The clandestine press printed humorous publications that mocked Axis propaganda AND Belgian collaborating newspapers. The underground press was also instrumental in distributing hundreds of thousands of copies of Steinbeck’s The Moon Is Down to Norwegian, Dutch, Belgian and French underground resistance networks. The book’s impact cannot be overstated.

It was easily the most popular work of “propaganda” in occupied Western Europe. The Nazis banned it where ever they could…in fact, possession of a copy in some instances meant an automatic death sentence. Yet in spite of the repression, Dutch and French translations were in such demand that illegal printings were the largest undertaken during the entire war. The Moon Is Down was the best-known work of literature during the war in occupied Europe.

It is curious to ponder why The Moon Is Down, written by America’s beloved author, could be so widely criticized in America. Yet, the book was so widely popular with those under occupation. Could it be that one-sided propaganda is too transparent to be taken seriously by those directly in the crosshairs of invasion? Could it be that those under the yoke of occupation and involved in resistance movements, “see-through” the hyperbole of propaganda? Could it be that overstated, overcooked, one-sided partisanship is an ineffective form of persuasion? Could it be that universalist themes that focus on the common aspects of human existence are more effective than selective facts that encourage a particular persuasion?

These questions are rhetorical. With the news these days being dominated by the war in Ukraine, notions such as “unprovoked invasions, refugees, resistance movements, propaganda”, etc., John Steinbeck’s message might be worth considering….