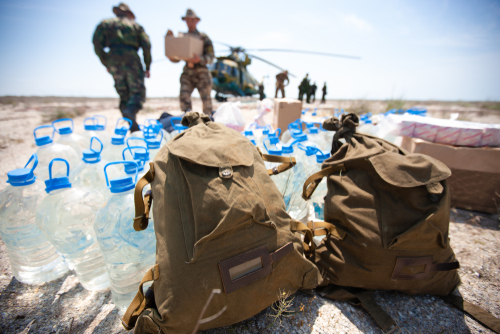 Brussels (Brussels Morning) As ever more disturbing reports emerge from Belarus, where migrants and vulnerable people are stranded in freezing temperatures at the border with Poland, the European Commission has allocated 700,000 euros to help with food, accommodation and other essential goods worth 700,000 euro.

The immediate EU funding will support the International Federation of Red Cross and Red Crescent Societies (IFRC) and its national society, the Belarus Red Cross, to deliver much needed relief, including food, hygiene kits, blankets, and first aid kits.

As the number of migrants increases and more deaths are being reported at the border, the EU has denounced Belarus’ President Alexander Lukashenko for behaving like a “gangster” in his efforts to orchestrate a “hybrid attack” to destabilise the bloc.

Poland’s Prime Minister Mateusz Morawiecki accused the Lukashenko regime of “state terrorism” and of “weaponizing” migrants by luring them to Belarus in order to shepherd them to the Polish border, sometimes by force.

Thousands of migrants, mainly from the Middle East, including a large number of Kurds, have been camping at the Belarus-Poland border in what the EU says is a retaliatory act by Lukashenko’s regime for the sanctions the EU slapped on his regime following the brutal suppression of protests against his rule.

According to Kurdistan24 Turkey, some 430 Kurdish migrants are expected to return this evening to Erbil, from Minsk, after an agreement was reached between the Kurdistan region and the Iraqi Ministry of Foreign Affairs. The flights were arranged for those who wanted to return, the media outlet reported.

The European Commission said it has allocated 200,000 euro in humanitarian funding to the IFRC, as part of the EU’s overall contribution to the Disaster Relief Emergency Fund, managed by the IFRC.

The additional 500,000 euro in humanitarian funding has been mobilized by the EU, and it will be disbursed as soon as it secures humanitarian partner organisations.

“The EU is supporting its humanitarian partners to help alleviate the suffering of people stranded at the border and in other parts of Belarus. I am calling for continuous access of humanitarian organisations from both sides to reach this large group of refugees and migrants to provide them with urgent assistance”, Commissioner for Crisis Management, Janez Lenarčič, declared.

Despite having stated that it “stands ready” to provide additional humanitarian funding in response to “clearly established” humanitarian needs, the EU executive was accused of incoherence and of having an “inhumane European Migration policy”.

An article in Foreign Policy magazine by Andrew Connelly argues that the EU’s approach to the migratory crisis is “panic-stricken” and “warlike”, rendering the entire process a dysfunctional system ripe “for exploitation by hostile actors”.

Connelly maintains that the problems start “at home”, citing how an EU member state, such as Poland, has a record of blocking people fleeing Russia’s oppressive Chechnya republic as well as Central Asian autocracies like Tajikistan.

Just this week, on 16 November, a Polish border patrol was directing water cannons at migrants who were trying to break through the barbed-wired near the border with Belarus.

Last month, on 14 October, the Polish Parliament approved a law that human rights advocates say legalises migrants’ pushbacks across its borders, and is in complete breach of the country’s commitments under international law.