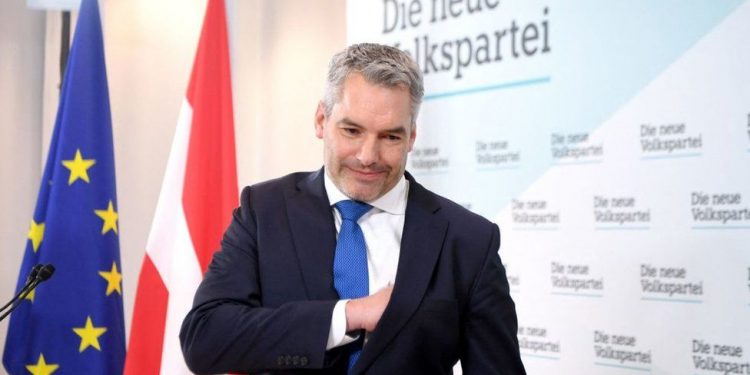 New People’s Party (ÖVP) head Nehammer succeeds Alexander Schallenberg, who resigned when his predecessor Sebastian Kurz opted to retire from politics. Schallenberg had held the office since October, when Kurz had stepped down under pressure from junior coalition partners over corruption probes that had been opened against him and his associates. At the time, Foreign Minister Schallenberg took the mantle of Chancellor, while Kurz returned to the parliament and remained as the party head, a move that prompted the opposition to dismiss Schallenberg as Kurz’s “puppet”.

Once Kurz announced his retirement from politics last week, Schallenberg announced he did not plan to run for party leader, and said he would resign to make room so that the new party leader could become Chancellor, maintaining that it was best that a single person should hold both posts.

The ÖVP picked Nehammer, a hardline Interior Minister renowned for his anti-immigrant stance, as the new party chief, amidst turmoil in the party which had become defined by Kurz, its central figure in recent years.

Speaking at the swearing-in ceremony, as those protesting coronavirus measures booed the new Chancellor, President Van der Bellen warned that no one can know what surprise the virus could next spring. “We should not create false expectations and should not promise anything that later turns out not to be achievable”, he cautioned in an apparent swipe at Kurz, who just months ago claimed that there would be no further coronavirus measures for vaccinated people.

Nehammer announced he would keep the party – and the government – on the same law-and-order agenda that had been central to Kurz’s rule, and stressed that the coronavirus pandemic would be his top priority. He faces the problem of restoring the image of his party, which lost its lead of more than 10 points over its main rival, the Social Democrats (SPÖ), after the corruption allegations against Kurz started pouring in.