Armenia, an obedient satellite of Russia 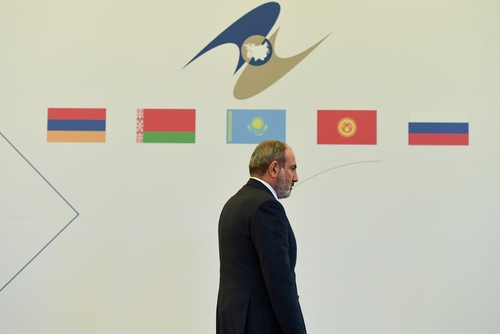 Belgium (Brussels Morning Newspaper) On the morning of February 24, public warnings of the Western intelligence communities about the imminent invasion of Ukraine turned out to be true as Putin announced that he had launched a “special military operation” against Ukraine from three axes. The response was scathing, however. The collective West has begun to provide unprecedented assistance to Ukraine in its fight against Russia. Novel sanctions were imposed on Russia to deal a crushing blow to the country’s economy.

But it was not only Ukraine that sought the support of its international partners. Russia, the agitator of the invasion, has also started to look for partners to overcome its international isolation. For Russia, the first focus was on the post-Soviet space which was known as “Russia’s backyard” until recently in many Western scholarly circles. Surprisingly, Russia has failed to get unanimous support from all post-Soviet countries. Of the members of the Commonwealth of Independent States (CIS), a regional platform that unites most but not all the post-Soviet states, only Azerbaijan supported Ukraine, while Central Asian republics chose the path of ‘strategic silence’. Only two countries have backed Russia: one of them was Belarus, which forms the Union-State with Russia, while another one was a long-standing Russian ally Armenia.

Armenia, which currently chairs a Russia-led military bloc called CSTO and hosts about four thousand Russian troops, was the only country other than Russia to vote against the decision when Russia’s membership in the Council of Europe has suspended a few days ago in further punishment of Moscow. Speaking retrospectively, this is not an anomaly for the Armenian foreign policy. When Russia destabilized Ukraine in 2014, Armenia made its geopolitical alignment clear and refused to cooperate with the EU. The then Armenian president Serzh Sargsyan infamously became the first foreign leader to congratulate the Kremlin chief on the annexation of Crimea. To integrate Russia fully, Armenia joined the Eurasian Economic Union – a Russia-led economic integration platform that is an alternative for liberal world order for many in Moscow.

Ever since Armenia has continued to support Russia in multifarious theaters. Ukraine is one of them, apparently. Armenia along with North Korea, Syria, Iran has always voted against all resolutions of the UN General Assembly condemning Russia’s illegal actions in Crimea and the Donbas regions of Ukraine. Officials in Yerevan went as far as to establish economic ties with illegally annexed Crimea in violation of the Ukrainian laws.

However, Armenian and Russian interests overlapped not only over Ukraine. As early as 2019, dozens of Armenian servicemen were sent to Syria to support Russian military operations. “You [Armenia] were the first to respond to our call,” said Russian Defense Minister Sergei Shoigu, who is a mastermind behind the Russian invasion of Ukraine and the military intervention to Syria that caused thousands of civilian deaths. Armenia has been chastised by the US State Department for backing the Assad regime, which has perpetrated atrocities on a global scale.

The unbreakable nature of the Armenian-Russian alliance was once against exemplified in Kazakhstan in January 2022. It was Armenia that facilitated the deployment of CSTO peacekeepers to aid the Kazakh government in the instability that occurred because of the protests against the central government due to socio-economic problems. A CSTO peacekeeping contingent, including the dozens of Armenian military servicemen, “assisted” in stabilizing the situation when the Kazakh government was busy purging protesters under the name of “terrorists”. The UN experts protested the Kazakh government’s actions that authorized a “shoot to kill” policy against any individual determined to be a “terrorist”.

Armenian-Russian military cooperation, which has been proved in practice in the cases of Syria and Kazakhstan, should be given special consideration in the context of Ukraine. Russia, which seems to have failed in its blitzkrieg in Ukraine and is facing unprecedented international isolation, is now looking for stronger collaboration with its partners. Unable to get such substantial political support from China and India, which Putin considers his traditional allies, he does not overlook his post-Soviet peers. In this regard, Belarus has already taken sides by enabling the Russian invasion via its territory.

To get the support of Kazakhstan, Putin had recently a talk with Kazakh President Tokayev. It’s been told that Putin asked Kazakhstan to support Russia’s military operations in Ukraine but got a “no” answer from Tokayev. It is likely that this issue was brought up during the talks between Putin and Pashinyan on February 26. However, unlike Kazakhstan, Armenia’s chances of saying “no” to Russia in the event of such an offer are close to zero. Armenia, which depends on Russia like no other country in the world, has a history of military cooperation with Russia in various war theaters. Besides, unlike Kazakhstan, Armenia has a social base for the execution of such acts.

The anti-Ukrainian sentiments in Armenia, where a large part of the population has a positive view of Russia, have increased significantly in the last decade. It is no secret that these sentiments in Armenia partly stem from the Azerbaijani-Ukrainian relations. Azerbaijan and Ukraine have always endorsed each other’s position over various spheres and one of them was the Nagorno-Karabakh conflict, where Ukraine made it clear that it recognizes the Armenian forces as the forces of the occupation. Therefore, cheerful comments of the Armenian social media users against the background of Russia’s military aggression in Ukraine should not surprise us. A few days ago, a photo of a poster “Russian Army” in support of Russia on the Kyiv Bridge in Yerevan was spread on social media. The arrest of ex-Armenian military servicemen in Ukraine as a saboteur allegedly working for Russian intelligence and the presence of Armenian nationals among the captured Russian POWs are very telling. Moreover, the Armenian illegal entity in Nagorno-Karabakh – an Azerbaijani analogue of Donbas – backed by Moscow and Yerevan, announced its recognition of the breakaway Donetsk and Luhansk People`s Republics immediately after Putin`s recognition a few days prior to the invasion. And this is happening against the backdrop of the generous support by Azerbaijan, Armenia`s arch-nemesis, to Ukraine: humanitarian and medical aid worth USD5 million, plus free oil products for Ukrainian vehicles.

Richard Giragosian, a political scientist, told that there was little choice and even less of an alternative for Armenia in explaining why Armenia was the only country that backed Russia’s position at the Council of Europe. But what makes Armenia’s participation in Russia’s military campaign likely is not only the absence of choices but also the risk-free nature of such actions. In Armenia, where the internal political struggle goes over who is more pro-Russian, participation in such a campaign is not a risky act for the ruling elite. Condemnation of Armenia’s actions against Ukraine should not be expected from the Armenian opposition, which just recently proposed forming the Union State with Russia.

Of course, Armenia’s open support for Russia’s position in the Ukraine crisis is not only due to the close ties between the two countries. There is consistency that exists in Armenia’s foreign policy doctrine. This consistency is about Armenia’s recognition as an aggressor and occupant by the UN resolutions and European Human Rights Court (ECHR) decisions. This consistency and an imperishable Armenian-Russian alliance drove Armenia on the wrong side of history for more than three decades and seems it will continue to do so for a period of time.

Tags: an obedient satellite of RussiaArmenia
No Result
View All Result