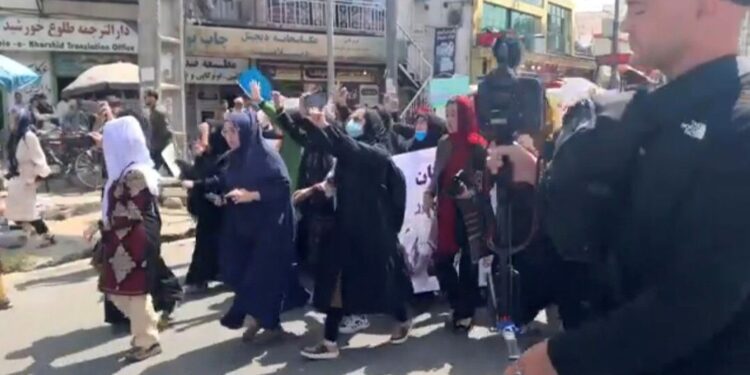 A year after the Taliban seized power; Afghanistan has once again become an immense hell for everyone especially for women. The Taliban are once again imposing sexual apartheid, depriving women and little girls of their most basic rights when they represent nearly 50% of the population in a country decimated by successive wars. Afghanistan is a country where the women’s voices, young generation, and ethnic group were silenced.
On August 15, 2021, Afghanistan was captured by the Taliban, and the Haqqani network seized power through military force. Finally, all 20 years of achievement and freedom were destroyed when Taliban took over the control of Kabul.

During this year all the civil society, political activist and religious, and the rights of people of Afghanistan have been seriously trampled.
Genocide, deportation and forced migration, ethnic and linguistic discrimination are regularly happening in different part of the country.
Seventy percent of the population does not have enough to eat every day. Hospitals are unable to care for all the sick and epidemics reappear.
Also Women and girls have lost even their basic human rights like access to education and due to gender discrimination they are living in an uncertain and hopeless situation. The young generation of the country is strongly suffering from unemployment, lack of basic standard education facilities and dealing with lots of unfair social affairs.

In Afghanistan women are obliged by Taliban to wear Burqa, or Neqahb even in the TV show, and also to be accompanied by a guardian in the street. Women almost excluded from the world of work and education. Those who demonstrate for their basic rights are kidnapped, imprisoned, tortured, rape or killed by this terrorist group of Taliban. The women activists said

Universities and high schools are closed girls and the luckiest of them continue their education in clandestine schools where courageous women continue to teach them at the risk of their lives.

Since then, women of Afghanistan have returned to resistance to warn the world about the nature of the new masters of Kabul. Unfortunately, their voices were ignored by the world. The consequences are disastrous not only for them but for the whole country which has plunged into a terrible humanitarian crisis. To get out of it, we must first start reconsider the status of women and involve them “women” at the negotiating table instead of legitimize the Taliban by the term; de facto authority. Moreover, we should name them for what they are: terrorists. But we are far from the mark.

There is three important key for the Taliban policy: ban women from education, work place, freedom of speech, force marriages and their strong relation with Al-Qaida.

First, School and all institutions for higher education and workplace are still closed for women and girls. Event they remove women from the ground. They don’t have the rights to organize demonstrations, 2 days ago videos published by social media that Taliban security forces opened fire over the heads of women who protest in Kabul, and Taliban welcoming ladies by shooting.

During this year, the Taliban has become more violent, they have imposed stronger and harsher laws, for the people, more extremist, but especially against the women of Afghanistan.

Every day they organize house-to-house raids in search of former workers, arbitrary arrests, imprison and kill former civilians and military, and continue the genocide of the Tajik and Hazara people.
The Afghan people want the international community to consider these cases war as crimes.

As the most important part of the Taliban’s policy in the country is to remove women from the civil society, to exclude them from any education and to keep them in the role of slaves, the life of these women becomes more and more difficult.

Secondly, and this is very unfortunate, freedom of expression is almost dead in Afghanistan. So in this country where freedom of thought and expression is suppressed so cruelly by this group of extremists and dictators, why is the world trying to deal with these human rights violators in this way? Do Afghans and their lives even matter?
In the past, more than 3,000 women worked in the media. Today, there are less than 100 women working in difficult conditions, but only in Kabul. More than 250 media outlets, including TV, radio and newspapers, have been closed, and journalists are facing in a danger.

Third, President Biden revealed that al-Qaeda leader Ayman al-Zawahiri was killed by a U.S. drone strike in Kabul. Yet the Taliban have always claimed that their regime has honored commitments made to ensure that Afghanistan is not used as a base for international terrorism and that they have cut their ties with groups like al-Qaeda. However, the presence of Al-Zawahiri in Kabul seems to contradict them and shows that they are not honest with the people of Afghanistan and also with the world.
Fourth, the key issue in Taliban foreign policy is the situation in Pakistan, Iran, India, Tajikistan and China. Recent events, including regular fighting on Afghanistan’s borders, are not acceptable. They sometimes try to maintain contact through diplomatic channels, as the governments of Qatar and Pakistan do, with the European Union and the UN. They are also trying to resolve the sanctions against the Taliban leadership and to resolve the economic crisis. The people of Afghanistan criticize the organizations and governments because they see that the international aid that should be going to them is in fact going directly and only into the hands of the Taliban. Every week between 23 to 30 million dollar cash UN give to the hands of Taliban and there is no report, in which way Taliban are using it.
The first year of the Taliban was a catastrophe and a disaster for the people of Afghanistan, especially for women, ethnic groups like Tajiks, Hazaras, Uzbek and Hindus.

To talk about the role of international community especially United Stat of America, then the following is an analysis of U.S. policy in Afghanistan:

This goes against President Trump’s previous and repeated calls to withdraw troops from Afghanistan in May 2021. Just as U.S. Representative Zalmay Khalilzad and the Taliban recently agreed to withdraw troops in May in the agreement signed in Qatar on February 29, 2020, President Biden has only extended it to September 11, 2021.

The American military intervention in Afghanistan remains the longest intervention in their history; despite this the terrorist networks continue to operate there. Targeting ISIS fighters and terrorist groups, the U.S. military has deployed a GBU-43/B Massive Ordnance Air Blast (MOAB) known as the “Mother of Bombs”. In addition, the lifting of restrictions on the movement of ground forces means an expansion of military activity.

President Bidden’s symbolic foreign policy decisions were clearly intended to end a foreign presence on Afghan soil and a war he could not see ending. While the cutting military spending by nearly a billion dollars a week.

Even more important, today is the time to counter the Taliban’s strategy, which human rights activists have long called for. Negotiations with the terrorists must stop immediately. In other words, the Taliban must not be recognized and humanitarian aid money must be channeled through independent NGOs

Afghanistan women’s government in exile published a press release: The ruling Taliban group does not respect any international laws, conventions or human rights. The country no longer has a constitution. The people have to undergo all imaginable sacrifices under the oppression of intransigent fundamentalists.

In other parts of this press release, it is mentioned that: The Afghan people (men and women, old and young) are living a critical situation in an atmosphere full of crimes and targeted killings.
We are witnessing mass murders, killing of youth and children, rape of women and forced marriages,
Women protesting against the Taliban, soldiers, journalists, employees, famous people of the country, especially in the north, have been persecuted, imprisoned and murdered by the Taliban.
How is it possible in the 21st century, that a country becomes a prison for its people and the rest of the countries in the world just look on with indifference?

Don’t you think that the incidents of September 11, 2001 in the United States, the brutal murders of people by Islamic fundamentalists in France and Belgium, Denmark, India, Somalia, etc. are not enough for the world to experience?
Afghanistan remaining a base of world terrorism how could the situation be calm in the region and in the rest of the world?

The Afghan Women in Exile government has explained to the world why Pakistan’s military intervention in Afghanistan is being ignored: intervention and interference in Afghanistan’s political affairs is a long-term problem that started with the creation of the infernal ISI organization and has reached its peak in this critical situation.

Pakistani soldiers are active in the Afghan battlefield and the Taliban government system (management and leadership) is directly supported by the ISI.

Afghanistan’s underground mines and resources are exposed to looting by countries in the region, especially Pakistan. Why are the world’s legal organizations silent on this issue?