A Reminder That Consumerism Fuels the Global Climate Crisis

by Andrea Lard
in Our pick 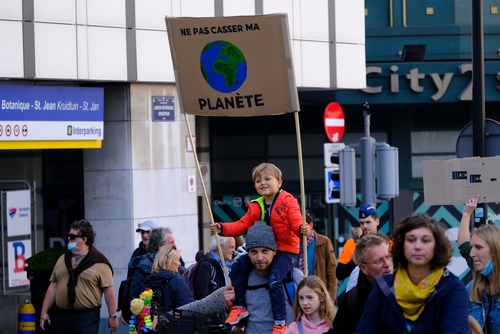 Brussels (Brussels Morning) The COP26 Climate Summit just concluded, and the biggest takeaway is that the developed nations are not doing enough. Countries continue to pay lip service to the climate crisis and vow to cut emissions. Yet, year after year, progress is slow, if at all. At issue, balancing economic growth and meeting rising consumer demand while investing in net zero carbon promises.

The notion that consumerism fuels our international climate crisis isn’t a new one. Politicians, scientists, and climate advocates have highlighted their concerns for years. Reduce consumption, and we can make progress on carbon emissions. However, it hasn’t been that simple.

When a country continues to show economic growth, other countries want to follow. Developing countries look to the more affluent, developed countries as a benchmark for achieving economic growth. Therefore, when the affluent leading global economies encourage consumerism, they inevitably become ever-bigger environmental offenders because of the increased emissions and global influence.

Developed countries have painted themselves into a corner following decades of encouraging consumption. We are indoctrinated into believing we need a new cell phone or computer every year or two. Homes are cluttered with rarely used small kitchen appliances. In affluent countries, many citizens own multiple oversized homes. You can’t ask your country to consume less. So, leaders scramble to find ways to reduce emissions during the actual production of consumer goods.

Affluent nations like the United States tried to hold businesses accountable for their emission with carbon tax or credits. However, what they found is that companies moved production to developing nations. Developing nations gladly accepted these new businesses because it meant economic growth for them.

As developing nations became production meccas for large corporations trying to avoid domestic emission restrictions, their economic status increased. Citizens were making more money and could consume more. Eventually, the developing nation becomes a developed nation with a focus on economic growth and an accompanying need to encourage consumerism. Within a relatively short time, it too joins the ranks of major climate offenders.

At the UN Climate Summit in 2014, the Nicaraguan representative stated, “the structural causes of the climate crisis lie within political and economic models based on unsustainable patterns of production and consumption of developed countries…”. Since then, the developed countries have tried to buy their way out of the crisis by shifting production and emissions to developing nations.

It seems the more things change, the more they stay the same. The COP26 Climate Summit ended with more strong talk of cutting emissions by switching to renewable energy. And while it is true that cutting emissions and healing the planet is of great importance, leaders fell short in addressing the other half of the problem – consumption.

It is worth recalling that in “Completing the Picture”, first published in 2019, the Ellen Macarthur Foundation’s argument on emission stated that “45% comes from producing the cars, clothes, food, and other products we use every day.” Until we address consumption, we are only addressing half of the problem.