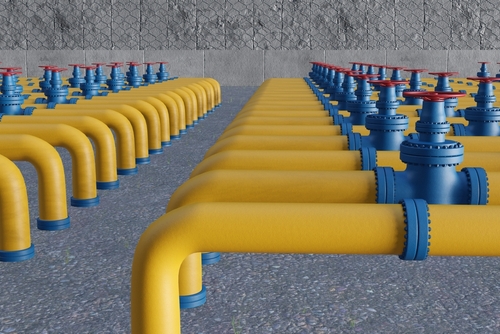 Array of crude oil and natural gas pipes on asphalt floor. 3D illustration of the concept of oil refinery industry

Belgium, (Brussels Morning Newspaper) The invasion of Ukraine has been a cold shower for all of our complacent energy policies and it has surfaced once again the never-settled debate on the role of alternative fuel in Europe. This is where this year the annual ‘MED & Italian Energy’ Report (SRM) comes into play.

As it happens, I believe this document could not come at a more crucial juncture. Twenty years ago, Europe’s energy mix favoured oil and coal, with a small percentage coming from renewable energy. At the dawn of this decade, before the Russian invasion, the balance had shifted in favour of natural gas and renewables, indicating that, short of a revolution, at least an evolution was taking place in our approach to energy.

But if there is a question raised from the fog of war in Ukraine, I think it should be: “will this be enough?”. And the answer, here, is clearly no. From the beginning of the war, Russian energy export to Europe has fallen 80% and we replied by diversifying our suppliers and reducing demand. Blessed by a very mild winter and with the gas storage facilities still at their top capacity, it is beginning to look like Europe will emerge relatively unscathed from this winter. But the issue is not whether we will endure this winter, but if we will survive the next one, and the next, and the next…

As the report clearly points out, we need to reinforce the Mediterranean dialogue if we really are serious about energy security. And I fully stand with SRM experts when they state that this should not just be limited to fossil fuels. Different Mediterranean countries are growing their renewable capacity, and through trade in hydrogen, these countries could find new pathways for their own growth as well as rejuvenated cooperation with the EU.

Moreover, the use of alternative fuels could prevent the loss of resources and know-how from the industries and means of production that will be abandoned in favour of more sustainable ones. Part of the existing gas infrastructure is compatible with hydrogen, and existing fertilizer-carrying ships can be easily converted into hydrogen tankers. Biofuels, (especially those that are generated from agriculture and husbandry by-products, and not those that come at the expense of crops), will be equally important.

The production of these alternative fuels can increase energy security in Europe and in the Mediterranean countries themselves, decarbonising energy-intensive sectors on both sides of our shared Sea and helping establish an energy dialogue that goes beyond fossil fuels. And, as the report dutifully points out, the legislative infrastructure is already in place or will be soon. For example, the REDII directive and SAF regulation, the Repower EU plan, and much more.

A major role in this new economy of energy will be played by ports and as a citizen of a major port city in Italy, I believe there is much to gain by that, as long as the sensitivities and safety of local communities are taken into account.

Intesa San Paolo has done an absolutely amazing job. Just as the previous years’ editions, this report is once again a “must-read” for decision-makers in the field of energy and I am grateful for the food for thoughts that you provided.

Besides, obviously, the well-formulated recommendations on EU energy policy, I like the idea that you, at SRM, saw and highlighted the opportunities that lie beyond an energy dialogue merely based on fossil fuels, to instead embrace a more holistic and comprehensive approach, which, I believe, should be more the rule than the exception inside these walls.