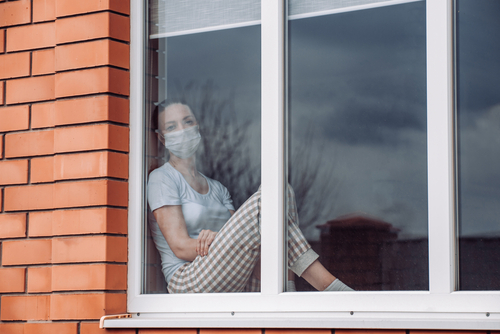 Caucasian woman sitting at window in a medical mask, looking out, wants to go out. protection against coronavirus infection, pandemics, disease outbreaks and epidemics

“All our efforts to contain the spread of the virus face a serious threat,” Merkel told reporters after the meeting, citing the fast-spreading mutated version of the coronavirus which first appeared in the UK.

Fear of the British strain

Even though the number of new cases in Germany has stabilised over the past few days, the German leaders showed their concern about the British strain of the virus, fearing it would be easy for infections to spiral out of control should a new mutation arise or the British strain start spreading throughout Germany.

“We are currently seeing in Britain what happens when a mutation occurs, when the numbers explode,” the Premier of Saxony, Michael Kretschmer, said. Until recently, the eastern German state had the highest infection rates in the country.

In addition to schools, restaurants and most stores being required to remain closed until 14 February, Merkel and leaders of 16 states also agreed that citizens must use more effective face protection – either surgical FFP2 or KN95 masks – when using public transport or on stores.

On Monday, Health Minister Jens Spahn announced that more than 34 million vulnerable citizens would be sent vouchers to collect the expensive FFP2 masks at pharmacies around the country. Bavaria’s Premier, Markus Söder, had already introduced mandatory use of FFP2 masks even before Tuesday’s meeting, a decision welcomed by the majority of Bavarians.