Why Denmark is complicit in the Abuse of Asylum Seekers and Refugees? 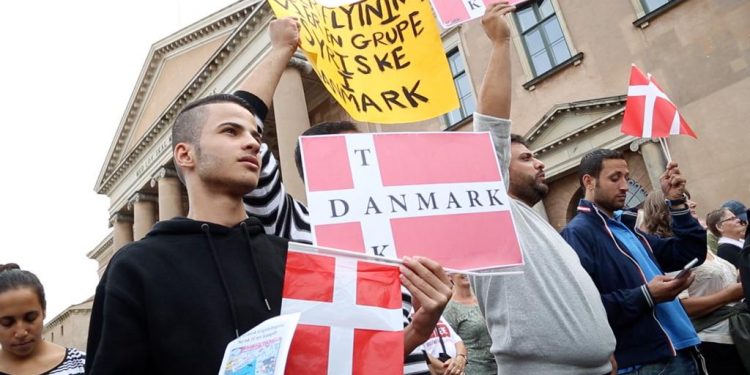 Belgium, (Brussels Morning Newspaper) – The Danish government is seen to be in contravention of many international laws. Denmark has failed in providing a decent environment for refugees coming from war zones in the Middle East and Africa. In the contrary, the government has victimized the victims and caused immense mental and long-lasting problems to them particularly children.

The 1951 Refugee Convention defines refugees as people who have been forced out of their homes because of conflict or crisis. Refugees have a fear of persecution for various reasons, including religion, nationality, political opinion or membership in a particular social group, and are therefore unable to return home (UNHCR, 1951). The world is currently witnessing the highest level of displacement on record, with 68.5 million individuals forcibly displaced as a result of persecution, conflict, violence or human rights violation (UNHCR, 2017).

The government’s recent policy on the treatment of asylum seekers and refugees is causing a major concern in Europe. The consecutive Danish governments have been very vocal on their anti-refugees approach which was then become a trend in the entire society.

The Danish government has been repeatedly accused of being complicit in the abuse of refugees and asylum seekers. The Danish government has repeatedly condemned harsh rhetoric and a tough immigration regime. In the recent budget, Prime Minister Mette Frederiksen announced plans to reduce asylum applications to zero. Furthermore, Danish authorities recently revoked residence permits for hundreds of Syrians, citing their alleged past armed conflict or persecution. These measures are unjustified and have caused many to question the humane treatment of these people.

Amnesty International reported that at least 380 refugees, including children, have been informed by the Danish Immigration Service that they will have to return to Syria after Denmark deemed Damascus and its surrounding area safe for return. Their temporary protection status, and therefore residence permits, have been revoked. Many of them are still waiting for their case to be finally decided in appeal.

This law would transfer asylum seekers to countries with higher levels of human rights standards, but the country has not implemented this change, for example, Syria and other warzone countries are still unsafe. Last year, The Social Democrat-led government has proposed a law requiring detention centers in other European countries, including the United States to deal with refugee cases. The asylum seekers’ cases would then be reviewed there. Despite this new law, there is still no clear policy on the treatment of asylum seekers in Denmark.

A recent report by the United Nations refugee agency (UNHCR) warned against the export of this process to other countries. It is important not to exploit the human rights of asylum seekers and refugees. This could lead to human rights abuses. It is imperative for the government to ensure that the care of asylum seekers and refugees is up to international standards. Moreover, it had called on the Danish government should ensure that the children are given access to the resources they need.

Experts urge the Danish government to provide protection for refugees who have been subjected to sex-related crimes, such as sexual assault or victims of wars and violence in general. They also argue that the Danish government must also protect the rights of minorities. The abuse of women and children is illegal. In Denmark, authorities failed to protect the rights of refugees due to their ethnic backgrounds.

Research by Amnesty International has found that civilians who have returned to Syrian government-controlled areas, including Damascus, are requested to go through a “security clearance”. This involves interrogation by Syrian security forces. Amnesty International considers these forces to be responsible for widespread and systematic human rights violations and abuses constituting crimes against humanity, including the use of torture, extrajudicial executions, and enforced disappearances.

In March 2021, the Danish government announced limits on ‘non-western’ immigrants. In April, it revoked the residency permits of some Syrian refugees and vulnerable asylum seekers. A major local study also revealed that a third of the refugees were not properly protected. In addition, the Social Democratic government did not provide legal assistance to the asylum-seekers, and they were not allowed to remain in Denmark. The abuse of refugees and asylum seekers in Denmark is a major problem.

On 29 April 2021, a bill was drafted with the purpose of making amendments to the Danish Aliens Act (“Introduction of the possibility to transfer asylum-seekers for adjudication of asylum-claims and accommodation in third countries”)/ (Indførelse af mulighed for overførsel af asylansøgere til asylsagsbehandling og indkvartering i tredjelande). This amendment created a legal framework for the transfer of asylum seekers to third countries for processing their asylum applications.

Abuse of Young Refugees in Denmark

According to NYTimes, Government documents obtained by Denmark’s Radio24syv revealed that the national Immigration Service had received repeated warnings from the Danish Refugee Council, a nongovernmental group, of mistreatment of children by staff members as early as December 2014.

The warnings cited suicidal tendencies among some children, and said that staff members had awakened children by spraying cold water on them or by removing a mattress from underneath them. But the warnings were followed up by just a single phone call to the Langeland municipality, the documents said. Last week, the government said it is going to strengthen the supervision of asylum centers.

On a recent afternoon, the only light burning in the offices of Langeland’s town hall was that of Kurt Habekost, the recently appointed temporary asylum director.

The Danish government’s new proposal to create camps for refugees reflects a trend that is becoming increasingly common in Europe. This policy is not necessarily good for young refugees. It isn’t feasible, and it won’t be cheap. As a result, Denmark’s government has announced it will build only four camps. This will only result in a larger number of asylum seekers and a higher cost for the government.

The Danish government’s actions have been condemned by international and Danish NGOs, which say they violate the rights of children in the country. The laws of Denmark’s asylum laws are not universally respected and the country’s children’s human rights are being violated. For instance, the police punished migrants who were caught with mobile phones, or those at risk of suicide. Further, they often punish people who are in the country illegally. The Danish authorities should also investigate the circumstances of those young refugees in order to prevent such violations.

In the country of Denmark, abuses of young refugees are occurring. In May last year, the immigration service sent a formal rejection notice to 70 Syrian children. Moreover, the authorities are violating the rights of the children. It is clear that the government is abusing these young people.

Denmark Violations of the European Convention on Human Rights

Since the refugee crisis of 2015, Denmark, the first signatory of the 1951 Refugee Convention, has been at the forefront of the debate around deterrent migration policies. Until recently, Denmark has been recognized as an egalitarian country with an exemplary welfare system. Now, this reputation might have been irrevocably tarnished as the Danish government continues to set itself apart from its Scandinavian counterparts with increasingly hostile migration control measures.

A Danish court has ruled that the law is unconstitutional, violating Article 8 of the European Convention on Human Rights. The decision comes after years of persecution of asylum seekers in Europe, including Denmark. Thousands of refugees have been separated from their families. Many have returned to their homes, while others have risked their lives to follow them. The case highlights the need for a legal solution.

The Danish government’s decision to revoke the residency permits of refugees from Syria is a violation of the principle of equal protection for all. This may lead to further violations in other countries’ treatment of Syrians. While the government claims that it is not forcing migrants to return to their homes, the fact that they were arrested for doing nothing violates the principle of “deterrence logic.”

The Danish government has repeatedly threatened to take the jewellery of Syrian refugees, and has implemented its “zero integration” policy.

In a letter signed by 33 lawmakers from 12 EU countries, the former minister for immigration and integration of Syria has imposed a revocation of the residence permits of Syrian refugees in Denmark. The letter is a response to the European Union’s failure to implement its own Global Compact on Refugees. It is a result of a lack of political will and a lack of solidarity among member states.

Last year, Prime Minister Mette Frederiksen said she aimed to reduce asylum applications to zero. The country decided to reassess the temporary permits of around 900 refugees last year and with the latest Damascus decision, the number stripped of residency has risen to 380 refugees.

Despite its contentious efficacy, the deterrence principle has not only continued to dominate Danish migration policies, but the government has continued to push the boundaries of international law with ever more inhumane frameworks. This is mainly due to the fact that the policymaking process is dominated by an electoral motive and the desire to satisfy a voter base that expects their government to “deal with undesired others” in an outright hostile manner. Although the electoral motive is a common feature in the EU-wide policy making process, the conditions unique to Denmark, the rapid turn of the party policies, low number of asylum seekers, and a relatively small population, have created what we might call a microcosm of the wider politicization process that is taking place at the EU level.

Tags: Why Denmark is complicit in the Abuse of Asylum Seekers and Refugees?
No Result
View All Result