West is United, high-intensity conflict must be avoided 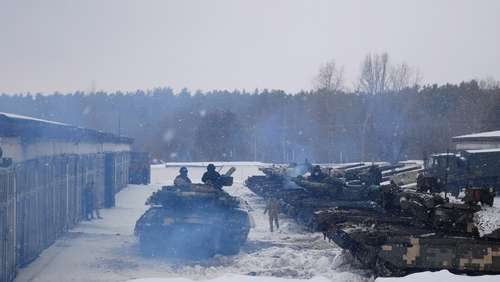 Kharkiv, Ukraine - January, 31, 2022: Tanks with tankers turn around and go to the training ground

Belgium, (Brussels Morning Newspaper) The formal recognition of the independence of the self-proclaimed separatist republics of Donetsk and Lugansk, both of which came into being in 2014.

Represents Vladimir Putin’s latest attempt to subject the West to a sort of stress test designed to gauge its response to an act of such gravity.

I believe that Putin is trying to ascertain just how far he can go before he triggers a robust reaction that goes way beyond the range of the currently targeted sanctions that have little real impact.

He has sought to raise the bar further: what we now need to understand is the extent to which his move was an attempt to achieve a negotiating position with Washington that enables him to start from a position of greater strength or whether, instead, he was already determined to continue on the path of military escalation, should the conditions permit.

The answer to this question will depend on our ability to move with determination plus unity and foresight as we attempt to bring this crisis back to the negotiating table, using all the means at our disposal.

The goal must be to find a mutual meeting point of interest, one that does not risk worsening relations between Russia and the West to the point where the situation could really explode into a high-intensity conflict.

We should also keep in mind that a failure to heal this rift by diplomatic means would further add to the gathering momentum of Russia’s growing alliance of interests with China.

The consequence of that would be to ensure a further polarisation of international scenarios with all the attendant risks for global stability and security.

We must move beyond the current intransigence with respect to the territorial integrity of Ukraine and focus all our efforts on avoiding any further deterioration in relations between Russia and the West. Not doing so would pave the way for an unprecedented level of confrontation and conflict.

Tags: Brussels Directhigh-intensity conflict must be avoidedMain-SliderMEPOpinion section
No Result
View All Result