Vestager fights back for Apple to pay due taxes 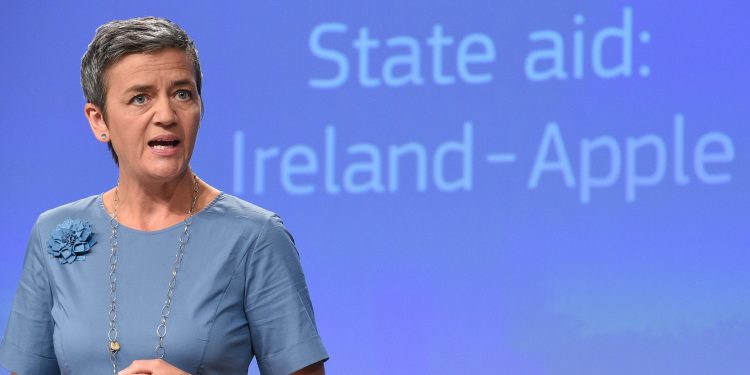 European Commissioner Margrethe Vestager is appealing to the Court of Justice of the European Union to overturn an EU General Court ruling that the Apple Corporation had not benefited from illegal tax breaks in Ireland from 2003 to 2014. On 15 July, the General Court ruled against the Commission’s contention that the American giant tech had enjoyed illegal tax benefits in Ireland.

In 2016, the European Commission fined Apple €13 billion, claiming that since the tech corporation had not paid its fair share of taxes, this was tantamount to unfair competition within the Union. The issue at stake hinges on the EU executive arm’s claims that Ireland afforded illegal State aid to Apple by granting selective tax breaks.

In a statement published late last week, Vestager said, “one of the Commission’s top priorities is to ensure that all companies, large and small, pay their fair share of taxes. If Member States give certain multinational companies tax advantages not available to their rivals, this harms fair competition in the European Union in breach of State aid rules.”

“The General Court judgment raises important legal issues that are of relevance to the Commission in its application of State aid rules to tax planning cases,” Vestager, the Executive VP and Commissioner for Competition, declared.

The Commissioner therefore “respectfully” questioned the General Court’s judgment, contending that a “number of errors of law” have been made in its appraisal of the merits of Apple’s case. This was why the Commission has chosen to bring the matter before the European Court of Justice.

“The battle between Apple, Ireland and the European Union is a long-lasting one and looks like an endless saga. But the European Commission believes it is important and that the July decision, which was against the European executive, sets a bad precedent which would put Brussels at a disadvantage vis-à-vis the US hi-tech giant. And it is also politically important for Margrethe Vestager,” euronews correspondent Darren McCaffrey concluded in an analysis of the proceedings.

The appeal to the Court of Justice of the European Union could herald a lengthy process, and take several years before a final decision is reached.

The Irish government has reiterated that Apple fulfilled its tax obligations in the country. Previous reporting by Reuters claims the Irish government supported the American company in defiance of the European Commission’s position because Dublin wanted to protect a low tax regime that attracted jobs for about 250,000 workers from multinationals.

The Apple court case represented a setback for the European Commission and its efforts to draw a line between the specifics this case — the issue of legal State aid — and the wider fight against tax avoidance. The Commission has shown its willingness to use tools never before used in asserting its position, even to the point of promoting a vote to change the tax structure in the EU.

Tags: Court of Justice of the European UnionMargrethe Vestager