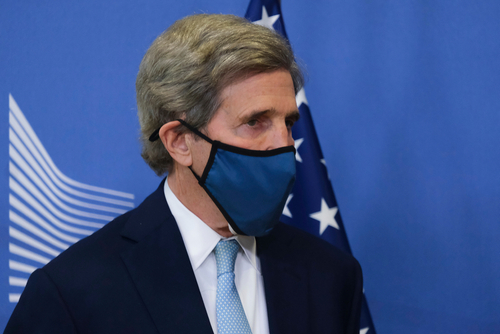 US Special Presidential Envoy for Climate John Kerry prior to a meeting in Brussels, Belgium on March 9th, 2021.

The few lines and comments from informed circles are – all in all – good news for the planet’s climate.

Despite growing geopolitical tensions and the objective difficulties of the two economies, both are under pressure to accelerate the pace of the energy transition, the US and China confirm that they are concentrating on the implementation of the Joint Statement Addressing the Climate Crisis released in April this year. Confronted with an existential and global threat, there is no alternative to collaboration.

John Kerry is deeply convinced of this, as some of his recent statements make clear. We need “a wartime mentality” to save the planet’s climate (June 28, 2021); “Simply, if we don’t cooperate (with China) we are dead” (June 29, 2021). “The time left is very short”, the crisis is “unfolding faster and more violently” than expected. “In World War two and its aftermath, leaders did what they had to do”; even allying with the Soviets. (July 20, 2021).

In the city of Tianjin, half an hour from Beijing by high speed train, the two delegations discussed in a “frank, thorough and pragmatic” way, presenting their respective national policies and anticipating measures to “institutionalise” dialogue and cooperation.

The Chinese position, like that of the European Union, is clearer. President Biden has promised that the United States will cut emissions by 50% -52% by 2030, decarbonising the electricity system by 2035. But it is not yet defined how – and to what extent – these goals will be achieved.

The decision rests with Congress. This weakens the American position; with the US nevertheless seeking a leadership role.

China responds to calls to do more by presenting a detailed operational plan; the “1 + N Framework” announced in August by the Chinese negotiator Xie Zhenhua.

The US and China seek a common position for COP26 and hope to replicate the model for cooperation, created and tested by Kerry and Xie themselves, which contributed to the success of Paris. At the foundation of this playbook lies the “US-China Climate Change Working Group” set up in 2013 and which also remained in operation with Trump.

And perhaps it is no accident that the meeting took place in Tianjin. The city, home to China’s largest eco-industrial park (TEDA) and industrial symbiosis network, has been dear to Minister Xie’s heart since 2003. But Tianjin is also home to one of the leading projects of US-China environmental cooperation. PHL-TEDA EcoPartnership, a Public Private Partnership led jointly by the city of Philadelphia with TEDA.

Compared to 2015, the international situation has clearly deteriorated. Growing geopolitical tensions and the confrontation between the United States and China – according to some – mark the entry into a Cold War. Many in Washington fear that the energy transition will weaken the US to the advantage of Beijing.

The sheer dimension and the innovational capability of the Chinese industrial system arouse  concern. Renewable energy capacity which has been installed in China in 2020 amounts to 33% of the world’s total. Yet, far from being a threat, the rapid development of Chinese renewable capacity has helped to cut costs for the benefit of the rest of the world. Electricity produced by solar is today the cheapest in history (IRENA). Prices of photovoltaic modules have fallen by 89% since 2010. Solar photovoltaic prices are forecast to drop by another 34% by 2030. By 2050, those prices are expected to drop by a total of 63%. This means utility-scale PV will cost only 2.5 cents per kWh. It is now cheaper to build and operate new large-scale wind or solar plants in nearly half the world than it would be to run an existing coal or gas-fired power plant in countries that represent 46% of the world’s population. “The benefits of the transition have never been clearer” (Francesco La Camera).

If there is an increase in energy prices in the short term (this is happening in Europe as we write), mainly due to the rising price of carbon, this is only an adjustment phase. They will decrease over time.

As Kerry noted, the Chinese see a contradiction between our requests to do more on climate while we raise sanctions on Chinese photovoltaic panels manufacturers.

The EU, which aims for a leadership role, sees Beijing as a necessary partner. The two blocs are converging in terms of environmental regulations and industrial standards. Those and pricing carbon are the best guarantee for a “level playing field” for European companies.

The ecological transition has entered its hardest phase. After thirty years of incremental adjustments and excruciating delays by politics and industry, the largely still only declared goals of climate neutrality imply a clear departure from past policies.

In the old Italian concession of Tianjin, the old world is dying, while the new struggles to be born: now is may be the time of monsters. We should be ready to fight them back.