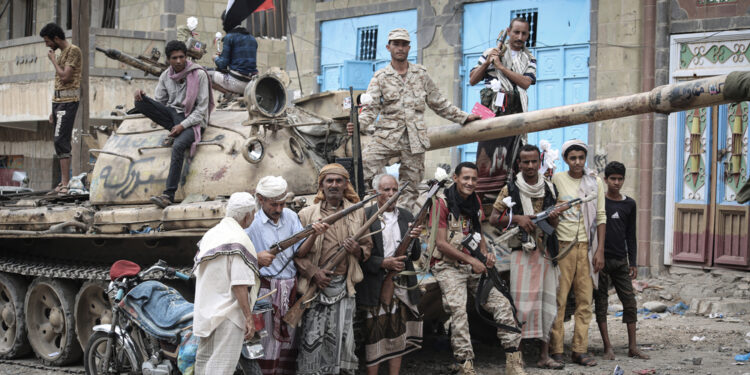 Greece (Brussels Morning) The war in Ukraine is ongoing, with weapons systems arriving in the country by the thousands, with the heads of the relevant agencies expressing concern about their future fate. But what is happening in another corner of the planet, Yemen, where the EU participates, indirectly, in the local conflict

We cannot avoid taking responsibility for the misuse of weapons as long as European and Western corporations are selling them to other countries participating, even indirectly in war crimes. Germany, France, Spain, Italy, and the UK, are some of the major arms dealers in the region, alongside major lobbying companies and mercenary groups. European governments have several times expressed their sympathies on the issue, but they have done very little.

According to the Yemeni human rights organization, Mwatana for Human Rights has documented at least 800 airstrikes and 700 ground offensives that have resulted in the deaths of over 3,000 civilians and injuries to at least 4,000 others.

The majority of European arms firms say they comply with international treaties to the extent required by national laws. Lovely, so the problem is political and concerns the Member States according to the companies, which attribute their corporate behavior to the windows of the respective legal frameworks.

W.E.B. Du Bois once said that the cause of war is preparation for war. The problem is that companies produce far more weapons than are needed for the security of the European Continent. With the goal of profit, they don’t really care where their sophisticated weapons systems end up, as long as their purchase agreement is signed.

The n1. contractor on the Al-Yamamah and Al-Salam contracts is BAE Systems, which has provided Saudi Arabia a wide range of combat aircraft, including the Eurofighter Typhoon, Hawk Jets, and Tornado that are employed in Yemen. “The UK constructed and licensed Typhoon and Tornado aircraft from the Royal Saudi Air Force have been engaged on combat missions in the Yemen conflict,” the UK government admitted.

MBDA has provided Saudi Arabia and UAE with thousands of cruise, air-to-surface, and anti-tank missiles that have been used in Yemen. The deals also included precision-guided bombs (also known as the Hakim 2). The list of companies that supply the area with guns is endless with those interested being able to purchase virtually anything they desire, including bombs from RWM Italia, and helicopters from Airbus Defence and Space.

Three major French arms companies (Dassault Aviation, Thales Group, and MBDA France) were named in a criminal complaint made by a group of NGOs for “potential collaboration in suspected war crimes and crimes against humanity in Yemen.”

The Paris Judiciary Tribunal has received a complaint from the independent Yemeni organization Mwatana for Human Rights, the European Center for Constitutional and Human Rights (ECCHR), and French NGO Sherpa, with legal assistance from Amnesty International. From 2015 to 2020, France delivered over €8 billion ($8.6 billion) worth of defense equipment, ammunition, and maintenance services to Saudi Arabia and the United Arab Emirates (UAE).

According to the United Nations, more than 20 million Yemenis, many of whom face the threat of starvation, relocation, and death, need humanitarian aid. To date, the international community has been unable to stop the attacks on civilians.

By the time a conflict starts, it’s already too late, you can’t control which way the bombs will fall. It is essential to examine if these Western exports could entail criminal responsibility on the part of companies that contribute to serious violations of international humanitarian law.

It is at least hypocritical on the one hand to promote the humanitarian profile of the EU and on the other not to ensure arms control.

The Nuremberg trials, in which several significant manufacturers, including distributors of poison gas to the Nazi regime, were convicted for war crimes, are considered the genesis of attempts to bring corporate actors to justice for atrocities committed during the war.

“Arms trade is not a neutral activity: companies are responsible for the human rights aspects of their exports and could be held criminally liable as accomplices if they persist in exporting arms while knowing that they could be used to commit crimes,” ECCHR official Cannelle Lavite stated in the past.