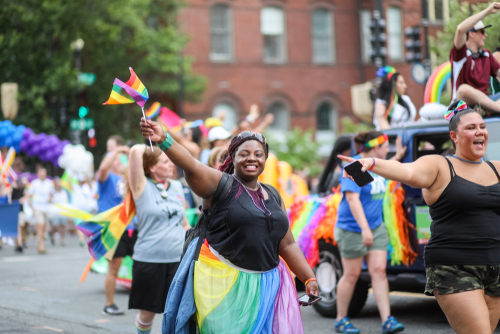 Washington, D.C. / USA - June 8, 2019: The Capital Pride Parade takes place every year on a Saturday in June between Dupont Circle and Logan Circle.

New York (Brussels Morning) It is Pride Month and numerous cultural institutions, schools, universities and even private businesses are showing their support for LGBTQ equality through social media, advertising and other methods. Even Major League Baseball, which has for a long time been one of America’s most conservative institutions, has gotten into the act.

Earlier this month the San Francisco Giants, currently the team with the best record in baseball, wore Pride themed uniforms during a game. The Giants play in a city with a large LGBTQ population, but fully 23 of the 30 Major League teams will have Pride events this year.

We should be careful not to read too much into this. For many of these organisations, gestures of this sort are a relatively cost free way to signal their support for LGBTQ equality while, in some cases, not doing much else to combat anti-gay bigotry. It is also likely that many organisations celebrating Pride this month are doing it more out of a sense of self interest and a desire to present themselves in a positive light, rather than out of genuine concern for LGBTQ people.

Regardless of their intentions, these gestures demonstrate that in America the culture, and even the private sector, support for LGBTQ equality is a net positive and that the US is much more progressive than the political life of the country would suggest. Institutions that change their Twitter avatar to be rainbow coloured, otherwise brand themselves with Pride motifs or issue pro-LGBTQ statements frequently do that knowing there is no real downside because LGBTQ equality is, in many parts of America, a broadly agreed upon position.

Among the places where LGBTQ equality is not broadly agreed upon is the US Congress, many state legislatures and the Republican Party more generally. Although LGBTQ equality is something close to a fait accompli in many corners of American culture and society, in politics and lawmaking it remains a contested idea.

The reasons for this are both the presence of social conservatives, frequently hiding behind religion, in the Republican Party, but also political structures that amplify those reactionary voices. LGBTQ equality is not a contested idea because America is broadly divided on the question, but because small rural states are over-represented in the US Senate and electoral college.

LGBTQ equality is just one of the issues where the disconnect between American society, culture and business on the one hand, and politics on the other, is evident. On issues including gun reform policy, recognition of the urgency of climate change and the increasingly diverse nature of the country, Congress and many state legislatures lag well behind the people.

America has become a country where LGBTQ pride is widely celebrated and where large swathes of even the corporate world try to present themselves as advocates for the environment and supporters of the Black Lives Matter movement, which was considered extremely radical only a few years ago, but also where, due to undemocratic quirks in our political system, the voices of intolerance and climate denial have disproportionate political power.

In many respects, the US is rapidly becoming a progressive country with a growing acceptance of diversity and desire for social democratic policies, but it remains governed by an older, whiter and more conservative political leadership. That tension creates an enormous strain on American life. Not only are policy problems not addressed but concerns of the reactionary minority very easily take over centre stage in American is politics.

The most apparent example of that today is the national conversation about critical race theory which is understood in conservative circles to be a full-scale attack on white America. The planet is burning; we are only now recovering from a pandemic that killed more Americans than World War II; mass shootings are a fact of life that too many Americans just shrug off; basic democratic rights to, among other things, vote are being threatened, but it is an obscure, and generally misunderstood academic theory that is dominating the news. This is happening not because a majority of Americans care about critical race theory, but because those who do are overrepresented in our undemocratic political system.

This is only the most recent example, but the ability of the older white minority to exploit the structural advantages that they have enjoyed for most of this century, is significant. In a democracy minorities, political and otherwise, should have their rights protected and have input in the political process, but they should not have either veto power over everything the government does or an easier path to political power, but those are the advantages enjoyed by older conservative white America – and they are holding the country back.