The new Tigrayan-Armenian Partnership Against Turkey

by George Meneshian
in Opinion 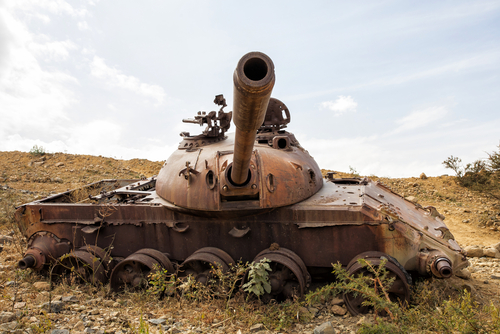 Wreckage of a tank in tigray area - Ethiopia

St. Andrews (Brussels Morning) Unlike the wars in Afghanistan or the Greater Middle East, the ongoing war in Tigray, Ethiopia is largely ignored by the international media, despite the immense humanitarian crisis it has unleashed.

Even the journalists and analysts that specialise in covering the Horn of Africa tend to focus on the headline incidents or the role external actors such as the Arab States and Turkey are playing in the war. In this article, I will avoid the above in order to focus instead on the information campaign that the Tigrayans are conducting against the Federal Government of Ethiopia, as well as the ad hoc “alliance” between the Tigrayan and Armenian diasporas against Turkey.

The Tigrayans accuse Turkey of participating in the alleged genocide of the people of Tigray that they claim is being carried out by the government of Prime Minister Abiy Ahmed. Diaspora In doing so, they cite the recent defence agreement signed by Turkey and Ethiopia plus Ankara’s delivery of Bayraktar TB2 drones to the Armed Forces of Ethiopia.

However, the underlying reason for Turkey’s support of Abiy Ahmed and his government is not linked to the Tigrayans. First off, Ethiopian forces operating under the flag of the African Union peacekeeping mission in Somalia are the key to Turkey’s presence in the Horn of Africa. Ethiopia has provided the largest contingent of military personnel serving in the Somali mission that is charged with preserving peace and stability. Without the presence of the Ethiopian forces, the jihadist Al-Shabab would represent a major security threat for the Turkish forces stationed in Mogadishu. Second, the 115 million-strong market Ethiopia represents is important to Turkey’s economic expansion through investment and construction projects in Africa and along the Red Sea. Third, Ankara could intervene in the Nile Dam dispute between Ethiopia and Egypt in order to put pressure on its rival, the Sisi regime in Egypt. Finally, the Horn of Africa is an important region for what some analysts term the “Neo-Ottoman” foreign policy of Recep Tayyip Erdoğan. This may well be the reason that Turkey maintains a strong presence in Somalia and in Djibouti as well.

Coming back to the Tigrayan issue, the international community does not acknowledge that what is going on in Tigray constitutes genocide. However, human rights-affiliated groups like the Genocide Watch and even the Ethiopian Orthodox Patriarch maintain that an on-going genocide is being directed against the country’s Tigrayan minority. The EU special envoy to Ethiopia, Pekka Haavisto has accused several government officials of pledging to wipe out the Tigrayans.

Despite the evidence presented by various NGOs, most international observers continue to refer to the atrocities in Tigray as ethnic cleansing (a crime against humanity), or they adopt a more pro-government stance. Nevertheless, even those who designate Tigrayan rebels as “terrorists” do not deny the fact that there is a humanitarian crisis in the Tigray Region.

In any case, Tigrayans, especially those in the diaspora communities of the West, view Turkey as an accomplice to the Ethiopian government’s genocidal policies.

The anti-Turkish narrative of the Tigrayan diaspora has served to strengthen its ties with Armenians even more than has been the case since the time of the Armenian genocide.

Armenians and Orthodox Ethiopians have always been close friends. The vast majority of Tigrayans (around 95%) are adherents of the Ethiopian Orthodox Tewahedo Church, which is an Oriental Orthodox Church, just like the Armenian Apostolic Church. It is said that the Geʽez script, also known as the “Ethiopian alphabet” was inspired by the Armenian alphabet, which was created by Mesrop Mashtots in 405 AD.

But what about the Armenians? In general, Armenians, but especially those in the diaspora communities, try to discredit Turkey’s public image. Their campaign stems from the 1915-1918 Genocide which led to the extermination of the Armenians in the Armenian Highlands (Eastern Anatolia) and Cilicia.

In their longstanding political and diplomatic struggle against Turkey’s denial of the Genocide, Armenians have allied themselves with other groups historically suffered at the hands of the Turks. These include the Pontic and Cypriot Greeks, Assyrians, Kurds, and Yazidis.

Ankara’s support for the Ethiopian Government, on the one hand, and the crimes against Tigrayans on the other, have led to the Armenian and Tigrayan diasporas forging a new alliance.

This new partnership went public when Tigrayan-Americans joined Armenians in front of the Turkish Consulate in Los Angeles on 24 April 2021 to mark the 106th commemoration day of the Armenian Genocide. The Armenian National Committee of America (ANCA) for its part – it is the most influential Armenian-American political institution – then sent its representatives, led by executive director Aram Hamparian, to attend the anti-Ethiopian government protest that Tigrayan-Americans staged in Washington DC on 26 August 2021.

Tigrayan organisations worldwide, especially those based in the United States, are more and more vociferous in condemning Turkey’s cooperation with the Ethiopian Federal Government, which, they claim, aims to cleanse Tigrayans from their ancestral lands, just as the Turks did with Armenians a century ago.

It is interesting, therefore, to see how the purchase of Turkish drones by Ethiopia led to an anti-Turkish campaign conducted by the Tigrayan diaspora as it seeks to convince the international community that there is an ongoing genocide in war-torn Tigray. Turkey’s genocidal past and recent support for Adis Ababa are two useful tools used by Tigrayan organisations to achieve their goal against the Federal Government. Armenians, for their part, seem to have found a new ally against Turkey regarding the Genocide issue.