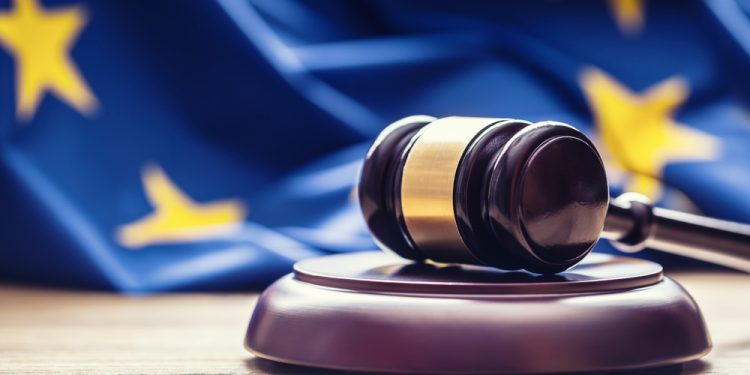 Judges wooden gavel with EU flag in the background.

One of the most groundbreaking outcomes of the Lisbon Treaty is the creation of the European Public Prosecutor’s Office, protecting EU budget otherwise vulnerable to fraud.

Athens (Brussels Morning) The history behind the establishment of the “European Union” is relevant to the EU budget, traditionally referred to as the “EU financial interests”. Namely, the European Commission has been the product of member states’ transfer of national sovereignty in certain fields and it is for this reason that the EU constitutes a legal order different than the national and international.

The EU has been established with unlimited duration, its own legal personality, mandate and internal and external powers. EU financial autonomy is one of the distinctive characteristics of the EU and symbolises the originality of European integration. The financial independence of the EU is as symbolic as the election of the European Parliament representatives directly by EU citizens, indicating the progressive disengagement of the EU from its member states.

EU financial autonomy is not an aim per se, though. Ultimate EU interests include human dignity, freedom, democracy, equality, the rule of law and respect for human rights, pluralism, non-discrimination, tolerance, justice, solidarity, equality between women and men, peace and the well-being of its peoples, as per Article 2 of the Treaty establishing the European Community. In order for these interests to be secured, common policies need to achieve a number of common intermediate objectives.

Such EU objectives are very vividly depicted in the “European Union’s Priorities”, decided every seven years and incorporated in the “EU Multiannual Financial Framework”, i.e. the EU budget, aimed at ensuring the achievement of those objectives not otherwise achieved by spending only at national, regional or local levels. It is, thus, evident that the implementation of common EU policies requires not only legal but also financial instruments.

Thus, it is obvious that serious threats are posed to the transparency and accountability pursued by the EU in this respect. No matter how sound and coherent the legal framework for collecting EU revenue and for the management of the EU expenditure is, the EU budget, like any country’s budget, is not safe from threats against it.

Actual cases recorded by the competent EU and national authorities are indicative of the dimensions and complication of the abuses committed against the budget — the latter is vulnerable to irregularities and financial crimes by numerous perpetrators and via various methods.

Every year, cross-border VAT (which constitutes an EU revenue) fraud causes estimated damage of 50 billion euros to the budgets of the member states and of the EU. In 2017 alone member states reported fraudulent irregularities against the EU budget of around 500 million euros.

These offences often remain insufficiently investigated and prosecuted at national level, due to a lack of law enforcement and judicial resources, or due to an under-prioritising of the protection of EU budget by the member states. Cross-border cases are also difficult to investigate and suffer from gaps in judicial cooperation. Therefore, serious fraud and corruption cases often end up uninvestigated and unprosecuted.

However, the effective protection of the EU financial interests is crucial for ensuring the ultimate EU interests shall be achieved. For effectively protecting its financial interests, the EU has, since long ago, enacted a relevant EU legal framework, while it has also established a number of EU institutions (primarily OLAF (European Anti-Fraud Office), Europol and Eurojust), so as to cooperate with the competent national authorities, since member states are the main collectors of EU revenue and managers of EU expenditure.

In this context, since its establishment, the European Commission has pushed for acquiring criminal competence for the protection of its financial interests. In fact, the protection of the EU financial interests has been the locomotive for the development of EU criminal law since it involves protecting a genuine EU interest, deriving directly from the EU’s own legal personality.

However, it was not until the entry into force of the Lisbon Treaty, in 2009, that the EU acquired such competence for inter alia protecting its financial interests.

The most groundbreaking development brought by the Lisbon Treaty in this field was the prospect of establishing a European Public Prosecutor with criminal competence over the protection of the EU budget. The idea for the establishment of such an institution was not new.

The Corpus Juris, a model code of substantial and procedural European criminal law for the protection of EU financial interests, drafted by legal scholars in the mid-1990s, subsequent to an initiative of the European Commission, provided for the establishment of such an institution – except the Corpus Juris was never enacted as EU law.

The Lisbon Treaty has allowed for the establishment of the European Public Prosecutor’s Office (“EPPO”), based in Luxembourg. The EPPO, which is expected to become operational within 2021, shall operate as a single office organised at both centralised and decentralised levels. Its central level comprises a college formed of the European chief prosecutor and 22 European prosecutors, one per participating member state (Denmark, Hungary, Ireland, Poland, Slovenia, Sweden do not currently participate in the EPPO).

The decentralised level is composed of two European Delegated Prosecutors (EDPs), who must be active members of the national public prosecution service or judiciary. Coordinated and supervised by the EPPO, investigations are envisaged to be conducted swiftly within the territory of the EU member states and cases to be brought on time before national courts.

In light of the unprecedentedly increased EU budget for the Multiannual Financial Framework 2021-2027 and the vital need for this budget to achieve the maximum benefits for the people of the EU, who have been also financially devastated by the extended pandemic, the EPPO is left with no leeway to fail its mandate.