The effect of EU sanctions on the Russian defence industry 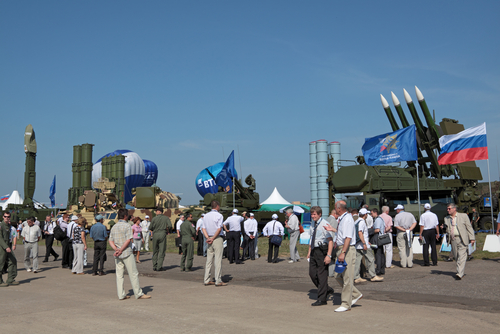 In the press conference that followed the rare visit by an EU diplomat,  Foreign Minister Sergey Lavrov called the EU an “unreliable partner” ans denied any link between the Kremlin and Alexei Navalny’s poisoning.

Borell was grilled by the Russian press on the EU embargo on Havana and the human rights regime in Latvia. He sidelined questions, but Lavrov used the occasion to denounce “unilateral pressure” and “illegitimate restrictions”, seeking to score points rather than strike a conciliatory tone.

Upon his return to Brussels, Borrel faced vehement criticism. A letter, drafted by Estonian MEP Riho Terras and signed by 50 MEPs, called for his resignation but the discussion in Moscow and Brussels remains one of “principle” rather than effect.

In effect, the question remains timely: are sanctions effective?

The case of the arms trade

To understand whether sanctions fulfil their intended purpose, one must look to Russian exports where the Russia’s defence industry provides the most significant data.

The sector accounts for approximately 13 billion dollars in export revenue a year, for anything from armoured vehicles and helicopters to missiles.

Impact to this sector can be deduced by looking at revenue and “opportunity cost”, particularly in terms of research and development.

Assessing the effectiveness of EU sanctions in Moscow

There is no consensus over the effect of EU sanctions on the Russian defence sector as Dr. Sergei Kostiaev,  a Lecturer in Public Affairs at Rutgers University, and Colonel (retired) Viktor Litovkin, a military analyst for the TASS news agency revealed, talking to Brussels Morning.

According to Dr. Kostiaev,  western sanctions have had a negative impact on the Russian defense sector, not least by “killing” Russia’s satellite Glonass System. The embargo led to the surge in prices for military-grade communication equipment and made the development of the next generation of Russian fighter jets (ms-21) significantly dearer. Among the hardest-hit companies are in the aviation industry and companies such as the United Aircraft Corporation and Roselektronika.

Focusing on sales rather than research, Colonel Litovkin dismisses the effect of EU sanctions as “minimal”. Most EU contracts related to the supply of spare parts and repairs for Soviet military equipment in Eastern Europe, who now look for contractors in Ukraine and Kazakhstan. With or without the embargo this would have been inevitable, he notes, as NATO prevents member states from buying modern Russian defence systems, as both Turkey and Greece have found out.

Assessing the effectiveness of sanctions in Brussels

In Brussels, the main policy line – while not unanimously – is that sanctions against Russia are effective and must be prolonged. However, most agree that the question at hand is mostly about “opportunity cost”, namely research and development.

In an email to Brussels Morning, Elisabetta Gualmini MEP (Italy, S&D) notes that defence – along with finance and energy – is a sector severely hit by EU sanctions. However, she admits, while “the negative effects of economic sanctions on the civil population are well documented”, it is not clear how they affect specific economic sectors, not least defence.

Katalin Cseh MEP (Hungary, Renew Europe) also believes sanctions must have impaired the Russian defence industry, somehow, but ultimately notes that an overall assessment is difficult because “Russia will never admit it openly”. Therefore, the effect is about the long-term effect on research and development in Russia.

Konstantinos Arvanitis (Greece, GUE/NGL) told Brussels Morning that while he supports democracy and rule of law, he disagrees with adopting a “punitive stance toward Russia” that is not “conducive to the democratic process”.

“There is ample evidence that some EU companies and industries bypass sanctions, either by exploiting loopholes in sanctions regulations (Italy) or by remarking products outside of their country of origin so that, on paper, those products are imported from a third country (as in the case of free trade zones of Moldova)”, says Cseh.

Focusing on Hungary, where her party (Momentum) is in opposition, Cseh notes that “when countries lobby for circumventing or dropping jointly established sanction policies, they speak against the interests of their community”, denouncing the Orban government for catering to Russia’s every whim.

Gualmini echoes the view that the EU must “show its teeth” first and foremost by showing unity. Member states should “resist the Russian tactic of “divide et impera”, she notes.

However, unlike her Hungarian counterpart, she is more confident in the EU’s “robust measures for monitoring the compliance of all member states” with the arms embargo.

The main concern, according to Gualmini is that the EU is not proceeding with effective dual-use export controls, such as cyber technology and surveillance.