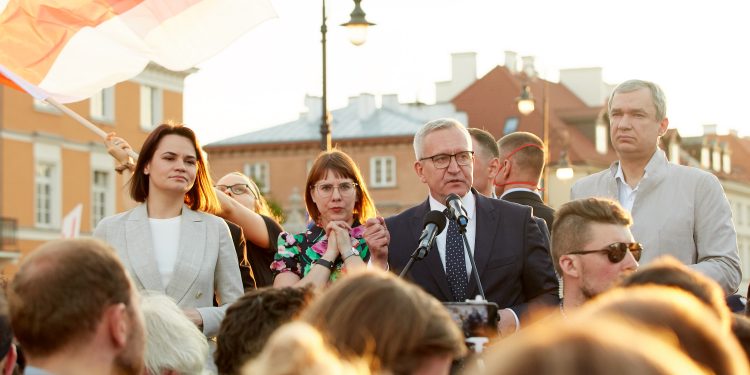 Athens (Brussels Morning) The diversion of a Ryanair flight by a Belarussian airforce jet to Minsk on May 23 is seen by many as state-sponsored hijacking. While a lot of attention has been devoted to why Minsk has the confidence to use such means, there was less attention on the terrorising effect this move was intended to create.

The arrest of Raman Pratasevich brought to the fore what it means to be a citizen of “the last dictatorship in Europe,” namely that there is no safety anywhere, not in Greece, not in Lithuania, and not in Poland. This sense of fear became evident when the 26-year-old Pratasevich was paraded on Belarussian TV as cowed and repentant.

Belarussia’s political opposition and human rights activists are in exile largely because they cannot safely remain at home. To understand the objectives of the opposition, Brussels Morning speaks exclusively to the opposition’s foremost leader, Pavel Latushko. The former culture minister and ambassador to Poland, France, Spain and Portugal, and Belarusian representative to UNESCO, is a member of the country’s political elite. Since October 2020 Latushko leads the National Crisis Management political body, a proto-government created by the Belarusian oposition with the objective of facilitating a democratic transition. Angelos Kaskanis (Brussels Morning). You are a member of the so-called, “proto-government in exile” of Belarus. Given allegations of voter fraud in Belarus, do you have any solid indication of your political appeal at home?

Pavel Latushko (PL). I wouldn’t like to get into sociological questions. Suffice to say that {our transitional political body} is recognisable in Belarus and the public knows us. The Belarusian opposition in exile consists of three bodies, operating as a proto-transitional government in exile. I Chair the People’s National Anty-Crises management administration and together with Svetlana Tihanovskaya, I seat on the Board of the People’s Coordination Council. Together with Ms Tihanovskaya’s office, we work towards a democratic transition. We have the critical political support required to lead democratic change in Belarus.

BM. You envisage a negotiated governmental transition in Belarus. Do you feel that this is possible given the Kremlin’s support for Lukashenko? Would a government lead by someone like Sviatlana Tsikhanouskaya elicit the kind of reaction experienced in Ukraine?

PL. I believe that Lukashenko may change his policy and abdicate his office if he realises that opposition stems from  a mobilised and organised Belarusian society on the one hand, with the support of the democratic community on the other.

The perception that Lukashenko acts as a Kremlin appointee is not beneficial for Russia, as it comes with great political risk and at a serious economic cost. All this may lead to Lukashenko’s quick exit from the political arena. Therefore, I do not believe that today there is any reason at all to talk about negotiations with the regime until we consolidate a strong common front against this usurper of power.

I do not think it likely that Russian military forces will be used to suppress the Belarusian protests. It is hardly possible to imagine the situation when a Russian soldier will shoot a Belarusian, as this would be opposed by Russian public opinion and would entail a domestic political cost for the Kremlin. Therefore, I do not consider this scenario likely.

We have repeatedly stressed that we are not pursuing geopolitical objectives but the restoration of human rights, democratic freedoms, an end to mass repression, the release of all political detainees, and the holding of democratic and legitimate elections that will bring a new, legitimate government into office.

Belarusian society is polarised. But the critical division is “for” or “against” Russia. Some Belarusians realistically advocate for broad good-neighbourly relations with the Russian Federation, while others favour a similar approach with the European Union. But we are united in our desire to have good relations with all of our neighbours. First and foremost, we prioritise human rights concerns. Issues of geopolitical choice are not on the agenda, although the Lukashenko regime and his media apparatus try to paint an enemy out of us, while painting Belarus as the Russian Federation’s last outpost, to the benefit of the Lukashenko regime.

BM. In the aftermath of what is regarded as an illegal state-hijack of a commercial airliner, there are concerted moves to make Belarussian sovereign borrowing more expensive. Do you believe that Russia’s economic support can sustain Belarus while funds remove sovereign bonds from their portfolios?

PL. Putin is effectively keeping Lukashenko on a short leash and is using this situation to deliver results in Russia’s interests. Lukashenko is not only toxic for the European Union, but also a toxic asset for Russia. It is In the interests of Russia to look for a replacement for Lukashenko as soon as possible.

Russia is providing a small amount of funding to support Belarus’ crumbling economy, to prevent a complete default or loss of control over the economic situation in Belarus. The recent decision to allocate US$500 million to Belarus is a drop in the ocean compared to the funds necessary to make the Belarusian economy viable.

Russia has learned from its Ukrainian experience in supporting dictators. When the Kremlin did lend $3 billion to Yanukovych, this money was lost. The Russian Ministry of Finance is not a great supporter of allocating funds to Lukashenko, understanding his domestic legitimacy issues as being far greater than his international troubles.

At the moment there are also active negotiations between Putin and Lukashenko to sign 27,28 or even 31 so-called “road maps” for cooperation between Belarus and Russia. Nobody knows the content of these road maps, but they are a sort of Russian conditionality that includes cooperation in the financial sector, the introduction of a single currency, consolidation of customs systems, unification of tax systems, military cooperation, and other strategically important areas.  From the point of view of Belarussian sovereignty, that is what we are talking about. That’s what is being traded both by Lukashenko and under pressure from Russia.

BM. Do you favour sanctions against Minsk or do you feel these would empower an “us against them” ethos on which all authoritarian regimes thrive?

PL. As of today, economic sanctions can be an important tool to stop mass repression, killings, infliction of bodily harm, torture, and to increase the permanent criminal liability for political views and convictions of Belarusian citizens. However, economic sanctions must be short-term, effective, and well-targeted. Only strong sanctions can induce the regime to make changes to meet the demands of Belarusian society: to stop repression, to punish all those responsible for crimes committed, to release all political prisoners, and to ensure the holding of democratic elections.

Political pressure should aim to completely isolate the regime, using every legal instrument and legitimate pressure tool, not least the identification of Belarus as a terrorist regime and initiation of criminal proceedings within the framework of universal jurisdiction under the UN Convention against torture. That should be continued, as envisaged by the signatories of this convention. Such cases have already been initiated in Germany and Lithuania, and discussions are currently underway in Poland and France.

It is also important to implement the European Parliament Resolution of 10 June 2021 on the necessity of establishing an international court for criminal offences committed by the regime in the territory of Belarus.

All these political, economic, and legal instruments can lead to change in Belarus.

Sanctions are not an end in themselves. Sanctions should not lead to the destruction of the economy of Belarus. Sanctions are an instrument of responsibility, an instrument, if you like, of compulsion to stop the most large-scale repression on European territory over the last 40 years.

BM.  The strike at Belarus’ biggest state-owned company (Belaruskali) suggests that people are more willing to be defiant and the government more willing to be repressive. Is this kind of opposition widespread across the economy, or only in specific sectors?

PL. A strike can have decisive political influence in Belarus. The workers’ movement is currently preparing for a strike at state-owned enterprises in collaboration with the democratic forces. However, the experience of such a strike movement in August 2020, and the subsequent one in October, has shown that they can only be carried out with appropriate prior work and preparation.

In addition to repression, an important trigger to mass strikes could be legal pressure against the regime.

The majority of Belarusians support the application of economic sanctions, ready to live with economic pressure to get rid of Lukashenko’s dictatorhsip.

The next important instrument of public pressure is the “Peramoha” (Victory) plan, put forward by the Situation and Analysis Centre ByPol and supported by Svetlana Tikhanovskaya’s office and the National Anti-Crisis Administration. The idea is to create an activists’ forum/movement that can affect decisive change in Belarus.

BM. Lukashenko is nothing if not a survivor. Do you feel he can maintain a role in the context of a more pluralist Belarusian regime? Is ideology relevant to such a transition?

PL. Lukashenko is so toxic to Belarusian society that no one will accept him as the leader of Belarus. And his time in the usurped presidency is coming to an end. Belarusian society understands that and international players too, including the Russian Federation.

Lukashenko’s rule relies on rigid power, a system of suppression, arrests, detentions, and aribtrary political sentencing. The regime has gone much too far, going after those signing up as candidates for the opposition, such as Viktor Babariko or Sergei Tikhanovsky. All major independent media outlets in Belarus have ceased to function, such as the Internet portal TUT.BY, which means there is little chance for election monitoring and public political discourse, the formation of trusted election commissions.

A line has been crossed. This regime is incapable of providing even an illusory semblance of democratic participation.