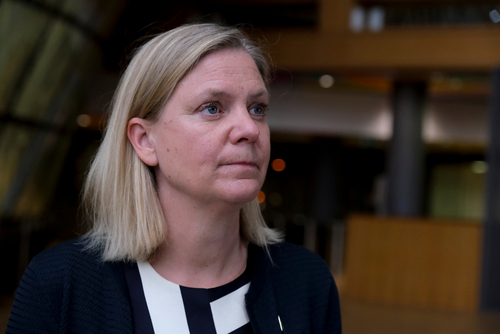 Belgium (Brussels Morning Newspaper) Sweden seems to be on the verge of a power change, as right-wing opposition parties managed to win a narrow victory in the general election on Sunday, securing what seems to be a 1-seat majority in the parliament.

Swedish Social Democrat Prime Minister Magdalena Andersson did not concede defeat on Sunday, saying the election was too close to call, with preliminary results expected to arrive by Wednesday. However, after more than 90% of the votes were counted, the four parties in the right-wing bloc appeared to have secured 175 seats in the 349-seat Riksdag.

Even though Social Democrats (S) increased their presence in the parliament from 100 to 108 seats compared to the 2018 election, the three parties that propped the Social Democrats’ minority government – the Green Party (MP), the Centre Party (C) and the Left Party (V) – together lost 9 seats in the parliament, creating the space for the right-wing parties to come into the overall lead.

In a surprising turn of events, the anti-immigrant Sweden Democrats (SD) party came second in the polls, likely securing 73 seats in the Riksdag, though Moderate Party (M) president Ulf Kristersson is still expected to be the right-wing bloc’s candidate for Prime Minister.

“We don’t know what the result will be,” said Kristersson in a speech after the early results hinted at a possible change in government. “But I am ready to do all I can to form a new, stable and vigorous government for the whole of Sweden and its citizens”.”

In the lead-up to elections, all parties attempted to present themselves as tough on gang crime, seen by the Swedish electorate as a major problem in the country, following a steady rise in shootings on the streets, which have overshadowed inflation and the energy crisis as a key issue.

The electoral authority will likely not declare official results for another two weeks, at which time the parties will have to engage in a series of very difficult coalition negotiations, with no party able to secure a majority on its own.

Kristersson would need the support of the SD, the Christian Democrats (KD) and the Liberals (L) in order to secure a single-seat majority as the results now stand. The SD has long been shunned by both sides of the political spectrum in Sweden, as the traditionally open country rejected an anti-immigrant party which counted white supremacists among its ranks.

The SD has since softened its image and is now increasingly seen as part of the mainstream right, and Kristersson has gradually deepened the ties between M and SD since he took over the Moderate Party in 2017. His attempt to become the PM after the 2018 elections failed as the Centre Party and Liberals refused to have the SD in the Government, which Kristersson wanted.

To stay in power, Andersson would first need to reconcile the agrarian Centre Party with the Left Party, who are ideologically opposed to each other, and then to secure a deal with the Green Party. If the current early results stand, Andersson would need the backing of another party, such as the Liberals, which indirectly backed her predecessor Stefan Lofven’s government by abstaining from a vote of confidence.

Showcasing the complexity of Swedish politics, when Andersson took over the government after Lofven resigned in November last year, she resigned within 12 hours as her minority coalition immediately collapsed. She was soon voted back in as the Centre Party abstained from the vote of no confidence.

Under the Riksdag’s principle of negative parliamentarism, a minority government can come to power unless a majority of lawmakers rejects the PM-designate, allowing parties to silently back a candidate by abstaining – in effect not voting against him or her.

If the elections really do return a slight majority for the right-wing, it would mean the bloc could prevent a centre-left candidate from becoming PM, even if they are unable to come to an agreement on who their PM-designate should be.