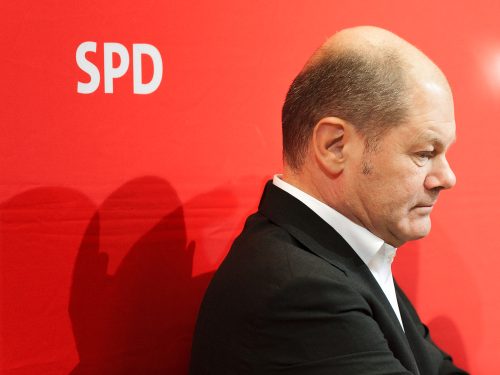 Berlin, Germany, 2016-02-22: Olaf Scholz from the Social Democrats takes part in the meeting at the party headquarter

Brussels (Brussels Morning) German Social Democrats’ (SPD) candidate for chancellor Olaf Scholz openly stated that he would like to form a government with the Greens, as the latest polls show his party is widening its lead over Chancellor Angela Merkel’s Christian Democrats (CDU).

Talking to Tagesspiegel daily on Sunday, Scholz stressed that the two parties overlap on a lot of policy proposals, such as plans to raise the country’s minimum wage from 9.6 euro per hour to 12 euro, the raising of taxes on the richest citizens and to accelerate efforts to switch to a zero emission economy.

His comments come as the SPD widened its lead over the CDU to five points in the latest INSA poll, currently enjoying 25% support over the CDU’s 20%. After briefly emerging in first place earlier this year, the Greens have now dropped to third place and are currently polling at around 16%, following a series of gaffes by the party’s chancellor-candidate Annalena Baerbock.

The CDU, meanwhile, has seen its ratings plummet as Merkel’s successor, Armin Laschet, is struggling to repair his image after he was filmed laughing during his visit to the flood zone in his home state of North Rhine-Westphalia, where he serves as premier.

Unless SPD ratings grow significantly in the coming weeks before the federal elections, Scholz will be unable to form a government without a third party, which could prove to be a challenge. The business-friendly Free Party (FDP) is polling at around 13%, and its support would guarantee a stable government, but its policies would likely clash with the centre-left plans of SPD and the climate change initiatives of the Greens.

An alliance with far-left the Left, currently polling at around 7%, would also be theoretically possible. Faced with criticisms from Laschet of flirting with the radical left, Scholz stressed that the Left could not be a part of the government unless it unambiguously commits to supporting NATO, transatlantic partnership with the US and sustainable public finances, policies which the party has opposed in the past.