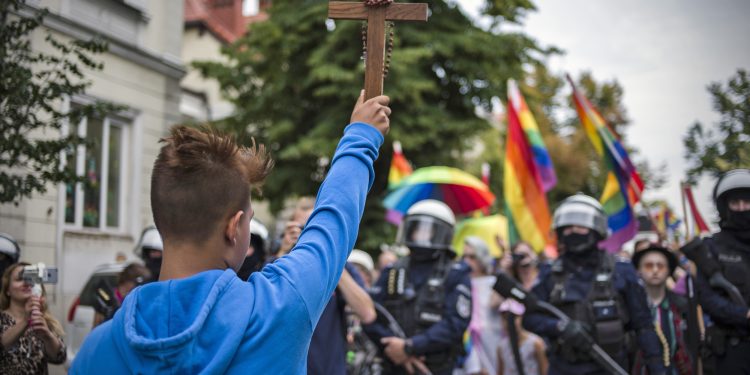 A boy holding a crucifix trying to block the route of the Equality march. On 10th of August the first ever "Equality March" organized by LGBTQ activists took place in the city of P?ock. About a thousand people participated in the event, while hundred of hooligans and nationalists were trying to interrupt the event. Some of the counter protesters have been arrested by the police. (Photo by Attila Husejnow / SOPA Images/Sipa USA)(Sipa via AP Images)

Brussels (Brussels Morning) Since its sometimes unclear transition from fascist dictatorship to ‘democracy’, Spain has held onto vestiges of the authoritarian, racist and homophobic legacy of the Franco era.

Over the past 50 years, the majority of Spaniards have embraced a free and open society, yet menacing protests calling for the outing of immigrants and the LGBTI+ community are all too common.

The instigators responsible for staging such outbursts are the proto-fascists of the 21st century—those who revel in the strut and posturing of the fascist past and condemn the liberal values championed by Spain’s governing socialists.

Ironically, Spain’s police, despite having been repeatedly condemned by Amnesty International for displays of excessive force in quelling demonstrations by pro-independence Catalans and the like, rarely if ever display any such zeal when it comes to maintaining public order during rallies organized by neo-Nazi elements of the country’s ultra-right.

Chueca is a well-known district in Madrid renowned as a safe haven for the LGBTI community. It is home to many people from Spain’s gay community, a place where people can feel secure in their identity. Last month, Chueca was the focal point for a sustained rampage by a mob of skinheaded neo-Nazis screaming vicious slurs.

The far-right demonstrators sported t-shirts emblazoned with slogans such as “100% white, 100% proud” and “Spanish and proud” as they marched through Madrid’s gay district pounding militaristic drums and roaring homophobic insults. Ostensibly, their purpose was to protest Spain’s socialist government’s 2050 agenda—a plan that supports progression in education, healthcare, taxes, jobs, pensions and the environment over the next three decades.

“Fuera sidosos de Madrid!” —“get out of Spain, AIDS-bearers!” they shouted in unison.

Chueca residents watched stunned as the police allowed the hostile march of neo-Nazis to pass through the neighbourhood, the rainbow flags that symbolize tolerance and acceptance in stark contrast to the fascist banners that waved beneath.

One banner displayed the slogan “die spanischen freiwilligen” (“Spanish volunteers”), commemorating the Blue Legion of the Spanish Civil War, which went on to volunteer its services in support of the Nazis in the Second World War.

As they marched through Chueca, shaven-headed, tattooed men from the white supremacist España 2000 movement fired off flares while jeeringly giving stunned onlookers the Nazi salute.

One bystander, a Chueca local, who said she had lived in the open neighbourhood for six years, filmed the neo-Nazis screaming “freedom” at passers-by, while aggressively trying to intimidate individual spectators. “Freedom from what? Freedom for who?”, she captioned her video on social media.

Throughout the event, the riot police, notorious for their rough tactics with batons, tear gas and rubber bullets when dealing with unarmed pro-independence Catalans or anti-monarchy protesters, stood idly by, taking no action, offering no restraint.

The demonstration was legally authorised because it was presented as being against Spain’s Agenda 2050. The reality turned out to be that it was a rally calling for homosexuals to be banished from Madrid. The two organizers of the demonstrations were each fined 600 euro on grounds that they misled the authorities about the purpose of the march.

Santiago Abascal, the leader of Vox, Spain’s growing far-right party, denied having any affiliation with the fascist Espana 2000 group, claiming he didn’t know who the protesters were.

However, Mireia Vehi, a congresswoman for the far-left party Popular Unity Candidacy (CUP), said otherwise. “They are Nazis, Mr Abascal, and you know them”,  she told Congress.

Madrid’s conservative premier, Isabel Díaz Ayuso, has come under attack from the left for her inaction, as the instances of homophobia have risen across the region. One week before the rally, she said “homophobia is inside the head of the left”, having denounced the legalization of gay marriage by former socialist leader José Luis Rodríguez Zapatero in 2015.

Targeted violence against the LGBTI community in Spain is a dark and worsening reality. Samuel Luiz, a 24-year-old gay man, died days after a brutal homophobic attack in July, a fatal victim of one of the many hate crimes committed against the LGBTI community in the country. Despite its continuing efforts to draw attention to the problem, the LGBTcommunity believes that the far-right has resolutely taken pride in its failure to support trans and gay rights in Spain.