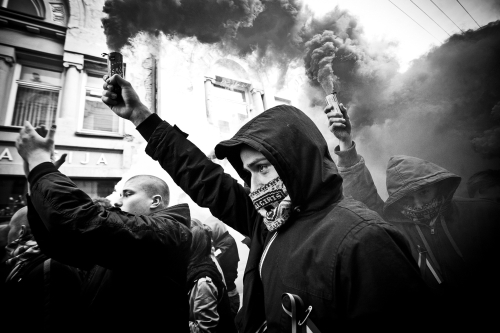 Brussels (Brussels Morning) The Federation of Jewish Communities in Spain (FCJE) is calling on the public prosecutor for hate crimes to investigate a rally held in Madrid on Saturday, where the gathering honoured División Azul, a volunteer military unit sent by  Spanish dictator Francisco Franco to support the Nazi invasion of the Soviet Union.

A video that surfaced from the rally shows a young woman surrounded by dozens of people carrying neo-fascist and Nazi symbols. She is seen at the lectern delivering an antisemitic speech.

“The enemy will always be the same, even though they wear a different mask – the Jew,” the young woman declares. “Because there is nothing that is more true than this statement: the Jew is to blame, the Jew is to blame, and the División Azul fought for this.” Later, she claims that communism is a Jewish invention designed to pit workers against one another.

According to El Pais, the FCJE called for those responsible for the rally to be brought before the courts. “It is unconscionable in a country with rule of law and full democracy for these serious accusations to go unpunished,” FCJE stated in a press release.

The case also prompted a reaction from Israel’s ambassador to Spain, Rodica Radian-Gordon. “Antisemitic proclamations made in the homage to the División Azul in Madrid are disgusting and cannot have a place in a democratic society,” Radian-Gordon wrote on Twitter. “Education and learning the truth about history is the way to avoid the past repeating itself.”