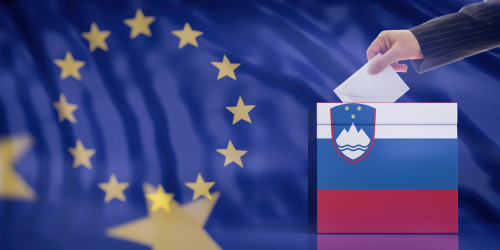 In his last term as the Prime Minister, Janša was set on a course that threatened to turn him into a problem for both the EU and the center-right European People’s Party (EPP). His far-right statements and crackdown on free media in his country have earned him comparisons with Donald Trump and Hungarian Prime Minister Viktor Orbán, a personal friend and ally.

Janša was a communist youth wing leader in former Yugoslavia and was even expelled from the party in 1983 for his extreme left-wing criticism of the people’s self-defense system. Ahead of the breakup of Yugoslavia, Janša increasingly turned towards the right and became a prominent figure in one of the first opposition parties.

He became the president of what is today the Slovenian Democratic Party (SDS) in 1993, during his term as defense minister in the center-left coalition government of Prime Minister Janez Drnovšek. Janša was accused of abusing his ministerial position to consolidate political power, trafficking weapons to belligerents in Yugoslav wars in violation of the UN arms embargo, and blackmailing prominent individuals by threatening to disclose their former ties to the Slovenian Communist Party.

Following Slovenia’s EU accession, Janša has first elected PM in 2004. His term was marked by an economic boom, but also by a scandal involving the procurement of Finnish Patria infantry fighting vehicles. Janša dismissed all allegations of corruption in the case as a “conspiracy by left-wing journalists”, naming and threatening individual journalists who ran the story, and attempting to use diplomatic channels to influence Finnish reporting on the scandal.

Janša lost the 2008 parliamentary elections but returned to power in 2012 despite the ongoing criminal investigation in the Patria case. He lost the no-confidence vote in 2013 after a corruption investigation report revealed he systematically failed to report his assets, with his coalition partners withdrawing their support for his government.

He was sentenced to two years in prison in June 2013 after being found guilty of receiving a bribe in the Patria case, but was released in 2014 and ultimately exonerated by the Slovenian Constitutional Court in 2015.

Janša returned to power in 2020, managing to form a ruling coalition after the resignation of PM Marjan Šarec. His third term in office was further marked by his confrontation with the media, increasingly far-right rhetoric, and siding with Europe’s problematic members – Poland and Hungary – behind closed doors of European Council meetings.

A big fan of Twitter, Janša was congratulating Trump on reelection even as the count was ongoing, and was later tweeting conspiracy theories claiming that Trump has won. Ahead of his country’s term in the rotating EU presidency, Janša reportedly produced a controversial – and potentially dangerous – non-paper, which called for redrawing of national borders in the Balkans.

Janša’s proposal contained a number of radical ideas, envisioning the breakup of Bosnia and Herzegovina, a land swap between Kosovo and Serbia, and the ultimate merger of Kosovo with Albania.

During his country’s EU presidency, in the second half of 2001, Janša increased his fight with critical media, even going as far as denying funding for the national press agency STA, after being dissatisfied by how the agency covered his meeting with Viktor Orbán.

Janša threatened to limit the state-funded independent agency to receive payments only for content that a government agency would deem to be a “public service”, imposing indirect censorship of its reporting.

As EP committees on Budgetary Control and Civil Liberties probed into Janša’s treatment of the media in October last year, Janša refused to meet with the delegation, instead of launching Twitter attacks against its members, accusing them of being “puppets of George Soros”.

Janša’s preoccupation with taking to Twitter to disparage the opposition and the media even earned him the nickname of “Marshal Twitto” among his critics, parodying the title of late Yugoslav leader Marshal Josip Broz Tito.

Coming into the April 2022 parliamentary elections, the polls indicated there would be a tight race between Janša and relative newcomer Robert Golob, leader of the new environmentalist party Freedom Movement (GS), and Golob’s convincing victory surprised most analysts and commentators.

The most shocking aspect of Golob’s victory was that the winning party was less than a year old, and Golob himself was at its helm for barely three months, with analysts believing the elections have demonstrated that the Slovenian public has had enough of the established political parties in the country.

Golob himself has several parallels with French President Emmanuel Macron, in that he had a successful business career before politics, and that he wasn’t exactly a political outsider though he was certainly perceived as such by the electorate.

Golob was CEO of energy company GEN-I for 16 years, turning the firm into one of the leading energy trading companies in central, eastern, and southeast Europe. Between 2008 and 2019, its revenues grew 20% each year on average, and the company has spread from its beginnings in Slovenia to France in the west, and Ukraine and Turkey in the east.

When it comes to politics, Golob was part of two leading Slovenian parties in the past. In 2011, he became vice president of the Positive Slovenia party, as its leader, Ljubljana Mayor Zoran Janković had the best shot at becoming PM himself. Later, when PM Alenka Bratušek split her faction from Janković’s party, Golob first tried to act as a mediator between the two factions, before ultimately taking Bratušek’s side.

Golob decided to return to politics in 2021 after losing his mandate as head of the GEN-I. He joined a liberal green party Z.Dej, founded in May last year, and ran for its president in January. After his win, he renamed the party the Freedom Movement. Now, the young pro-European party and its new president are pledging to restore the decaying media liberties in the country, revive the ailing civil society, and to protect the country from energy shortages and possible coronavirus resurgence in the fall.

With these promises coming from a Fullbright scholar with a Ph.D. in electrical engineering, who has 16 years of successful management experience in the energy sector, many Slovenes feel compelled to believe them, at least for now.