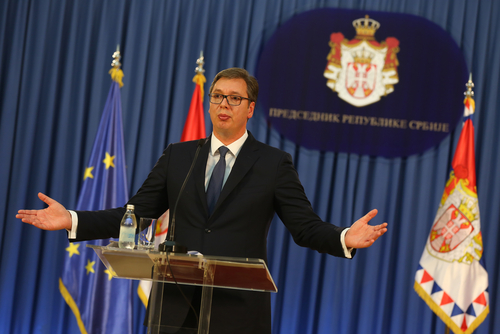 Belgium (Brussels Morning Newspaper) Serbian President Aleksandar Vučić was reelected on Sunday, winning an outright majority in the first round of presidential elections, leaving no need to hold a runoff vote. His party also secured a majority in the parallel parliamentary elections, though it remains unclear who will rule the nation’s capital of Belgrade.

“No one in Serbia never did this, and this means I am the only one who won two times in the first round, without it ever being close,” said Vučić during his victory speech. Even as the polls were closing, Vučić told his opponents they were “hoping in vain” it will be close.

Vučić won nearly 60% of the popular vote, while his Serbian Progressive Party (SNS) won more than 43% in the parliamentary elections. Together with its traditional coalition partners, Foreign Minister Ivica Dačić’s Socialists, the two parties will continue to hold a comfortable majority in the parliament.

Election campaign was dominated by the issue of Russian invasion of Ukraine, during which Vučić ran a difficult balancing act, attempting to simultaneously please Brussels, Moscow, and his own right-wing voters, while not making an enemy of either side.

Vučić’s Serbia condemned the invasion in the UN resolution last month, but it refused to implement any kind of sanctions against Russia. While EU candidate countries such as Serbia are generally expected to follow bloc’s foreign policy, Vučić defended his decision by noting Russia never sanctioned Serbia, and stressing that the country would ground to a halt without access to Russian gas and oil.

It remains to be seen whether Vučić will now pivot back towards Brussels, which provides far more to Serbia in pre-accession funds than Moscow does, with his political position secure for another four years and no longer dependent on right-wing pro-Putin voters in his country.

The EU has already warned Vučić he would need to pick a side in the conflict, with the European Parliament adopting a resolution last month stressing candidate countries have to follow lead on EU’s common foreign policy. While Brussels likely showed some tolerance towards Vučić considering the elections ahead of him, that tolerance will now no longer be there.