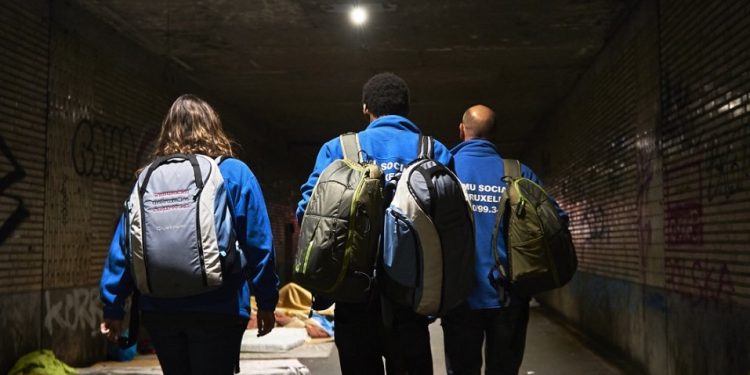 BRUSSELS (Brussels Morning) – It is all hands on deck for Samusocial to prepare an office building on the Hermann-Debroux viaduct by Monday to welcome some more than 300 homeless people.

Because it was not given the keys to the building until Friday morning, the organisation for the homeless has only four days to convert the old European Commission office building. This happens as the hotel that previously hosted the homeless is now resuming its commercial activities.

Numerous cupboards and mattresses in the entrance hall of the building are still waiting for a permanent place. Samuel Heugens is coordinating the redesign of the offices. “We only received the keys to the building on Friday and the first new residents will arrive at the end of the day on Monday,” he tells RTBF. “We only had four days to furnish the place as much as possible.” With thirty employees, Heugens tries to do everything that is possible.

“Given the limited time, we keep the layout simple. We provide furniture such as beds, bedside tables and mattresses so that we can convert current desks into small rooms as quickly as possible.”

In addition to that, there is also more technical work to be done: “We have to provide electricity and water pipes for the installation of the washing machines and in some places also break down walls.

“Only received the keys on Friday”

The timing is tight, but Samusocial had no other choice. After all, the hotel, located in the centre of Brussels, which it rented to accommodate the families involved, is reopening. “We had to redecorate this office building very quickly, because we had to leave the hotel that we had already rented for two years,” explains Sébastien Roy from Samusocial to RTBF. “For administrative reasons, we only received the keys on Friday. So it will be a real race against time.”

313 Homeless people, including children, will move into the building in Auderghem during the course of next week. Half of the people are already expected on Monday.