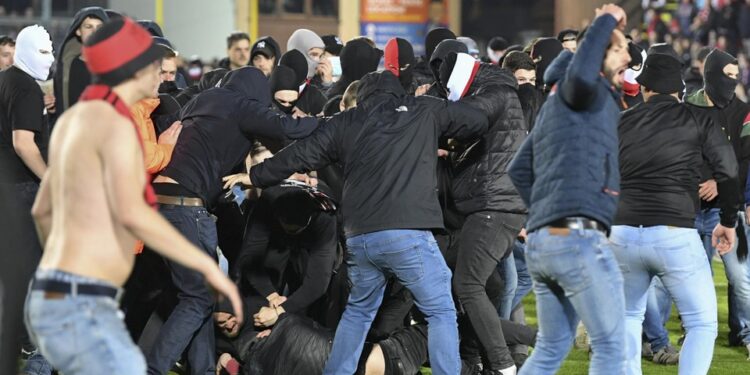 RWDM played a decisive game in Seraing on Saturday, with promotion to the first division as the goal. That ended in riots between various supporters. “We will work with the police to find out who the rioters were and will punish them severely,” said RWDM chairman Thierry Dailly.

About 1,250 RWDM supporters took buses to Seraing on Saturday. After the final whistle, Seraing fans stormed the field, after which it came to a confrontation with RWDM supporters. “It is outrageous and unacceptable,” said RWDM chairman Thierry Dailly. “That should never happen.”

According to Dailly, it would never have come to this if Seraing fans hadn’t taken to the field. “The finger is quickly pointed at RWDM, while it was Seraing supporters who provoked the riots.”

In addition, according to him, too little focus was placed on safety on the side of Seraing. “It was unprofessional. They have been very lax about the situation. There were hardly any safety measures in place, even though they knew there was a good chance that something would happen.”

RWDM can perfectly check who was present, as there was a combination arrangement for visiting supporters. This means that everyone must travel by bus and that only recognized supporter clubs are allowed to organise the transfer. However, the club says it does not know who the instigators of the riots are.

It is not the first time that riots have arisen with RWDM supporters, and according to eyewitnesses it often concerns the same small group. Although Dailly does not seem to know about a certain group of supporters who often cause a nuisance. “It is not clear who the rioters were. For that we still have to analyse the images further together with the police. It was really a mixture of supporters. The Dutch would also have been there.”

Police zone West, the zone in which Molenbeek is located, cannot yet say whether it concerns a certain group, since the images are still being examined. Although she emphasises that measures are already being taken to avoid such situations. For example, there are always plainclothes officers, so-called ‘spotters’ present. “These agents follow up on people who could cause problems,” said spokesman François Ganseman. Rioters will also receive a stadium ban of several weeks to years.

According to Dailly, the perpetrators should be severely punished. “There are so many exemplary top supporters, but our club is blackened by a number of amokmakers. A two-week stadium ban is not enough. The rioters have to get out completely.”