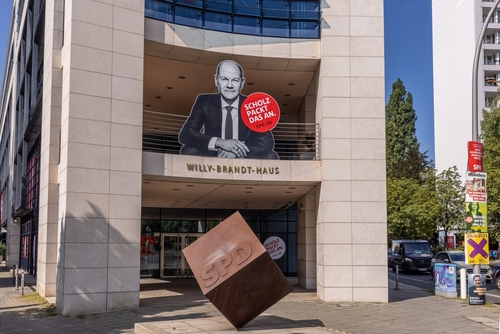 Merkel, who announced her retirement from politics ahead of the elections, saw her party, the Christian Democratic Union (CDU) plummet to its lowest-ever showing in the elections under her successor, the Premier of North Rhine-Westphalia, Armin Laschet.

Laschet, who reportedly still hopes for a shot at the chancellorship as coalition talks are starting, also congratulated his SPD rival in a letter he sent on Wednesday, having initially been criticized for failing to congratulate the winner sooner.

Despite his relative win, Scholz still has a long road ahead of him before he can clinch the chancellor’s position, since the third and fourth largest parties, the Greens and the business-friendly FDP, are currently engaged in talks to decide which of the two larger parties they might back.

The eco-friendly Greens have campaigned on combating climate change and rising inequality, and are seen as leaning closer towards a coalition with SPD, while the FDP is seen as opposing new taxes, aiming for fiscal conservatism, and is believed therefore to lean closer to CDU.

Going against the German political tradition, where the relatively strongest party invites smaller parties for coalition talks, the Greens and the FDP have begun their own talks with the goal of ironing out their differences and setting out a joint policy, before approaching either the SPD or the CDU with their coalition terms.

The strategy looks sound from the perspective of the two smaller parties, since between them they hold more seats in the Bundestag than either the SPD or the CDU. After first holding a round of talks on Tuesday, the Greens and the FDP are set to meet for another round on Friday. On Sunday, the SPD is set to talk to the FDP and the Greens, followed by talks between the CDU and the FDP.

It is highly unlikely that a coalition will take shape anytime soon, given the range of options and the differences between the parties involved. After the last federal elections in 2017, it took more than five months for a stable coalition to take shape, after FDP abandoned talks with the CDU, forcing the Christian Democrats to plead with the SPD to join a “grand coalition” for a second consecutive term.

A third consecutive grand coalition, while technically feasible, is extremely unlikely since both parties fear that joining their main rival for the last eight years lost them a lot of votes from their traditional bases in Sunday’s election.