Looted landmarks: how Notre-Dame, Big Ben and St Mark’s were stolen from the east 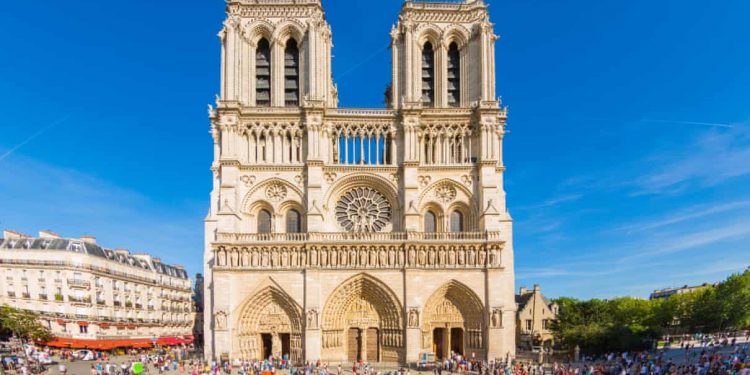 As Notre-Dame cathedral was engulfed by flames last year, thousands bewailed the loss of this great beacon of western civilisation. The ultimate symbol of French cultural identity, the very heart of the nation, was going up in smoke. But Middle East expert Diana Darke was having different thoughts. She knew that the origins of this majestic gothic pile lay not in the pure annals of European Christian history, as many have always assumed, but in the mountainous deserts of Syria, in a village just west of Aleppo to be precise.

“Notre-Dame’s architectural design, like all gothic cathedrals in Europe, comes directly from Syria’s Qalb Lozeh fifth-century church,” Darke tweeted on the morning of 16 April, as the dust was still settling in Paris. “Crusaders brought the ‘twin tower flanking the rose window’ concept back to Europe in the 12th century.”

It is not only the twin towers and rose window that have their origins in the Middle East, she pointed out, but also the ribbed vaults, pointed arches and even the recipe for stained glass windows. Gothic architecture as we know it owes much more to Arab and Islamic heritage than it does to the rampaging Goths. “I was astonished at the reaction,” says Darke. “I thought more people knew, but there seems to be this great gulf of ignorance about the history of cultural appropriation. Against a backdrop of rising Islamophobia, I thought it was about time someone straightened out the narrative.”

And so she has, with Stealing from the Saracens, an exhilarating, meticulously researched book that sheds light on centuries of borrowing, tracing the roots of Europe’s major buildings – from the Houses of Parliament and Westminster Abbey to Chartres cathedral and St Mark’s basilica in Venice – back to their Middle Eastern precedents. It is as much a story of political power, wealth and fashion as it is of religious belief, with tales of looting Crusaders, fashion-conscious bishops and globe-trotting merchants discovering new styles and techniques and bringing them home.

“Now we have this notion of east and west,” says Darke. “But back then, it wasn’t like that. There were huge cultural exchanges – and most came from the east to the west. Very little went the other way.”

Given their prevalence in the great cathedrals of Europe, it is easy to imagine that pointed stone arches and soaring ribbed vaults are Christian in origin. But the former dates back to a seventh-century Islamic shrine in Jerusalem, while the latter began in a 10th-century mosque in Andalucia, Spain. In fact, that first known example of ribbed vaulting is still standing. Visitors to the Cordoba Mezquita can marvel at its multiple arches intersecting in a masterpiece of practical geometry and decorative structure, never needing a repair in its thousand-year existence. The vaulted maqsura – the part of the mosque reserved for the ruling caliph – was designed to cast a sacred glow across the leader. However, the official leaflet will tell you little of the building’s Islamic origin, perhaps because it has been a Catholic church since 1236.

The pointed arch, meanwhile, was a pragmatic solution to a problem encountered by masons working on the Dome of the Rock in Jerusalem. One of the holiest sites in the Muslim world, it was built in 691 by the ruler of Islam’s first empire. The challenge was how to line up an outer arcade of rounded arches with a smaller inner arcade, while maintaining a horizontal ceiling between them. For the openings to align, the masons had to give the inner arcade tighter arches, forcing them to become pointed. Another world first can be spotted higher up in the shrine, where encircling the dome is an arcade of trefoil arches, the three-lobed style of arch that went on to encrust practically every European cathedral, voraciously adopted as a symbol of the Holy Trinity.

“Again and again,” says Darke, “I am so struck by how much of this stuff that we think of as essentially Christian and European was based on ignorance and misinterpretation of much earlier Islamic forms.” She points out that the enormous influence of the Dome of the Rock was down to the Crusaders of the Middle Ages mistakenly thinking the building was the Temple of Solomon.

They used the domed, circular layout of this supposedly Christian shrine as the model for their Templar churches (like the City of London’s round Temple church), even copying the decorative Arabic inscription, which openly chastises Christians for believing in the Trinity rather than in the oneness of God. Their pseudo-Kufic calligraphic patterns went on to adorn French cathedral stonework and the borders of richly woven textiles, with no one aware of what they actually meant.

The confusion was spread further by the first printed map of Jerusalem, published in Mainz, Germany, in 1486. It not only mislabels the Dome of the Rock as the Temple of Solomon, but depicts the building with a fine onion dome – a pure orientalist fantasy from the mind of a Dutch woodcut artist named Erhard Reeuwich. The book containing the map became a bestseller, reprinted 13 times and translated into multiple languages, influencing the spread of onion-domed churches across Europe in the 16th century. It is a tale of mistaken identity and unintended consequence worthy of a Monty Python sketch.

The transfer of Islamic motifs to the west wasn’t always so simple, though. The pointed arch took a more circuitous route. Darke traces how the arches first spread to Cairo, becoming sharper and more pointed under the Abbasid empire, and were in turn admired by visiting merchants from the wealthy Italian port of Amalfi, who channelled discoveries from their travels into their eclectic 10th-century basilica. This exotic building caught the eye of Abbot Desiderius, who visited Amalfi in 1065 on a shopping trip for rare luxury merchandise, and decided to take the pointed window design for his monastery at Monte Cassino.

Those windows were then copied for the Benedictine abbey at Cluny in France, the largest church in the world at the time. Abbot Suger, an adviser to kings Louis VI and VII, liked how the windows let in more light, and immediately applied the same design to his Saint-Denis basilica in Paris. Regarded as the earliest fully gothic structure, the basilica was completed in 1144 and its architect went on to work at Notre-Dame. “They all just copied it,” says Darke. “These were the most powerful churches in Europe, so the style completely took off, as all fashions do. When powerful people adopt something, everyone wants one.”

The list goes on. There are the early square minarets, found on such buildings as the Great Mosque of Damascus, that taper thinner and are crowned with a bulbous finial dome. These inspired such great Italian towers as those of Florence’s town hall and St Mark’s Campanile in Venice, prefiguring centuries of church bell-towers.

Drawing on architectural historian Deborah Howard’s research, Darke shows Venice to be more Arab than European, from its narrow winding passageways and courtyard homes with rooftop terraces, to the Islamic ornamentation of the Doge’s Palace (modelled on Al-Aqsa Mosque in Jerusalem) and the onion domes of St Mark’s. All are the fruit of trips made by Venetian merchants to Egypt, Syria, Palestine and Persia, fostering a level of influence that extended even to fashion: women in Venice were veiled in public and dressed in black from head to toe. “One cannot see their faces for all the world,” a 15th-century source commented. “They go about so completely covered up, that I do not know how they can see to go along the street.”

The book comes at a charged time, when supposedly western architecture is being mobilised by right-wing nationalist groups to bolster their idealised vision of a “pure” European identity. There are now countless social media accounts promoting messages of white supremacy disguised as heritage appreciation, while recent government edicts about tradition and beauty carry similar overtones. Darke’s work takes an eloquent sledgehammer to such ignorant, dog-whistle propaganda, revealing how the monuments idealised by the alt-right have their roots in the very culture of which they are so suspicious.

The ignorance is widespread, and perhaps the most surprising thing in Stealing from the Saracens is how much of this should not come as a surprise to the modern reader. After all, throughout the book, Darke summons the words of Christopher Wren, who was well aware of the Middle Eastern origins of gothic architecture, and of the structural techniques he was using for St Paul’s Cathedral.

“Modern gothic,” he wrote in the 1700s, “is distinguished by the lightness of its work, by the excessive boldness of its elevations … by the delicacy, profusion and extravagant fancy of its ornaments … Such productions, so airy, cannot admit the heavy Goths for their author.” Instead, he concluded, “from all the marks of the new architecture, it can only be attributed to the Moors; or what is the same thing, to the Arabians or Saracens”.

The irony is in the name itself: in Wren’s day, Saracen was a pejorative term for the Arab Muslims, against whom the Crusaders had fought their “holy war”. It originated from the Arabic word “saraqa”, meaning “to steal”, as Saracens were seen as looters and thieves. Never mind the fact that the Crusaders plundered their way across Europe, Jerusalem and Constantinople – pilfering the wonders of Islamic architecture as they went, and airbrushing the origins of their booty in the process.