Judge rules no extradition for Assange 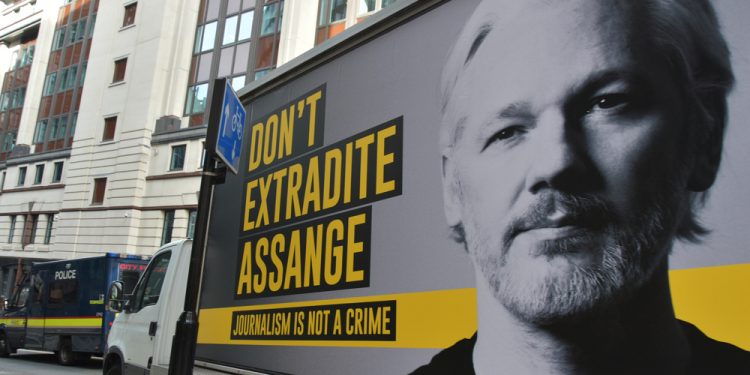 London, UK - September 7 2020: Extradition Case of Julian Assange versus USA starts today at the Old Bailey London, supporters are united in the fight.

London (Brussels Morning) A judge in the UK courts has ruled that Australian journalist and hacker Julian Assange cannot be extradited to the US on health grounds, denying the request was political.

The 49-year-old founder of Wikileaks has been called to face charges in the US.

Authorities claim he helped whistleblower Chelsea Manning break an encrypted password on official US computers, thus breaching the US Espionage Act with hundreds of classified documents leaked relating to the war in Afghanistan and Iraq.

District Judge Vanessa Baraitser said US prosecutors demonstrated Assange could be extradited but said he would likely take his own life once transferred.

“The overall impression is of a depressed and sometimes despairing man, who is genuinely fearful about his future”, she said after medical opinion.

“I find that the mental condition of Mr Assange is such that it would be oppressive to extradite him to the United States of America”, she deliberated.

Baraitser saw it as likely that Assange would be held in isolation and in those conditions attempt suicide, referencing the fate of child trafficker Jeffrey Epstein and to his disposition on the autism spectrum.

Prosecutors noted the outcome was the application of similar principles seen during the failed extradition case of British hacker Lauri Love in 2018.

Assange returned to Belmarsh prison after the trial, where he has been since April 2019 after being evicted from the Equadorian Embassy. He will now stay there until his bail hearing on Wednesday.

Assange’s supporters were both relieved at the verdict but have maintained, as has his lawyers, that the case is politically motivated as the leaked documents revealed damning evidence against the US authorities and potential complicity in war crimes.

Stella Morris, Assange’s partner, said the ruling was “the first step towards justice” but urged departing US President Donald Trump to free him for good.

“Mr President tear down these prison walls. Let our little boys have their father. Free Julian. Free the press”, she said.

Lawyers for the US authorities will appeal the decision.