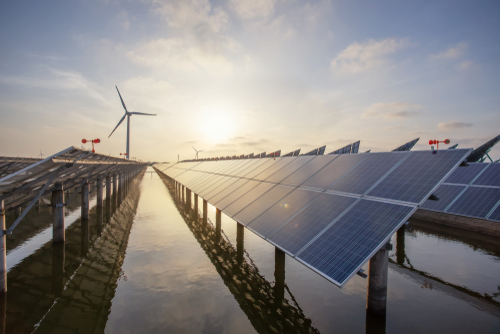 Belgium, (Brussels Morning Newspaper) Italy is building the first wind farm in the Mediterranean, off Taranto in the south of the country. As one of the largest consumers of natural gas in the EU, Italy accounts for roughly 42% of its energy mix, France24 reports.

The country covers 95% of its gas needs with imports, of which Russia supplies about 45%. The EU has announced plans to strengthen its green push in its response to the war in Ukraine by reducing its dependency on Russian energy imports.

Last week, Italy’s Prime Minister Mario Draghi stressed that an “accelerated investment in renewables… remains the only key strategy in the long term” when pointing out that Rome plans to wean itself off Russian gas by 2025.

Compared to the North Sea, building offshore wind farms in the Mediterranean is more complicated since the latter is significantly busier and deeper on average, which makes bottom-fixed projects costly and difficult.

According to the WindEurope association, France recently launched a competition for a floating wind farm. Meanwhile, Spain and Greece are preparing competitions for large projects.

The Taranto wind farm will comprise 10 bottom-fixed turbines and provide power for 21,000 households. The longstanding project should be completed by May this year.

Renexia, the company behind the project, also has announced plans to build a larger wind farm of 190 turbines off Sicily, which, it says, would power 3.4 million households.

Addressing criticisms that the wind farm would interfere with tourism, Renexia insisted that the structure would be “practically invisible” from the coast.

The company added that the wind farm can increase biodiversity, rather than jeopardise it, since the installations serve as artificial reefs.

WindEurope cautioned that the bureaucracy has been holding up a “staggering” number of wind projects, citing the more than 60 proposals for building offshore wind farms pending at Italy’s Ministry of Ecological Transition. PM Draghi maintains that the government is “working to streamline procedures, cut red tape and speed up investments.”

Davide Tabarelli, head of the the Nomisma Energia energy think tank, criticised the PM for stating that renewables are Italy’s “only key strategy.” He pointed out that the planned wind farm “is constantly being thrown around as the immediate solution to the energy crisis, and the fact that we can do without gas, especially Russian gas.”

Tabarelli cited the numerous challenges that wind power still faces, including the lack of suitable batteries for storage, and the associated waste.