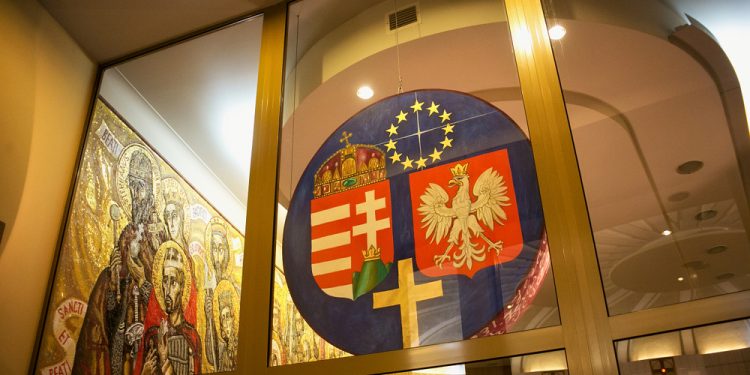 Coats of arms of Hungary and Poland in Basilica of the Divine Mercy of Sanctuary in Lagiewniki. Millions of pilgrims from around the world visit sanctuary every year.

Both countries vetoed the bundle or package deal linking the EU’s 2021-2027 budget and special aid provisions designed to offset the economic impact of coronavirus restrictions to the EU’s governance clause, a stratagem devised to ensure that access to EU funds requires adherence to EU democratic standards.

After the meeting, Morawiecki’s spokesman Piotr Müller indicated that Hungary and Poland are open to new proposals to overcome the deadlock, but these, he stressed, must be in line with the terms of EU treaties. As it stands, approval of the proposed bundle depends on all 27 EU member states voting in its favour.

Reinhard Silberberg, Germany’s Ambassador to the EU, at the meeting of EU envoys in Brussels on Monday, noted that the bloc should decide by tomorrow, Wednesday, whether a compromise can be reached, according to two unnamed diplomats. Germany’s Finance Minister Olaf Scholz told his EU counterparts at the virtual meeting of eurozone finance ministers that the dispute would have to be resolved by bloc leaders, according to another unnamed official.

The EU is investigating charges that Hungary and Poland have defied the bloc’s democratic principles. If the governance clause is indeed passed, this could limit their access to EU funds. Morawiecki and Orbán called for changes to the governance clause at the end of November, a demand the other EU member states rejected.

While Morawiecki and Orbán argue that making access to EU funds conditional on observance of democratic standards is not in line with EU treaties, Germany’s Chancellor Angela Merkel is insistent that rule of law is the very foundation and basic principle of the EU project. She has indicated her belief that reaching consensus at the next EU summit will not be easy, according to AP  reporting.

Germany currently holds the rotating EU presidency and must find a way to overcome the deadlock and pave the way for implementation of the financial package scheduled to come into effect in January next year.