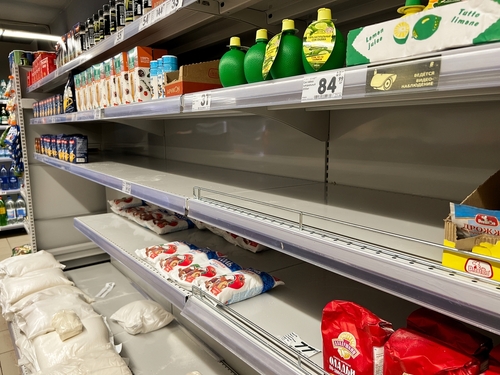 Belgium, (Brussels Morning Newspaper) Four supermarket chains in Greece announced restrictions on flour and sunflower oil purchases on Thursday as a precautionary measure. The move is in response to rising demand spurred by concerns that the war in Ukraine will limit supplies, Reuters reported.

The supermarket chains – AB, Kritikos, My Market, and Sklavenitis – limited online purchases and some in-store purchases, with AB setting the cap at three bottles of oil and three bags of flour per customer.

Russia and Ukraine being primary exporters of wheat and sunflower oil, the Russian invasion and ensuing conflict between the two countries set off fears of shortages.

Supermarkets in Italy and Spain had implemented similar measures before Greece emulated them.

“The reason for the cap on these products is only precautionary, as our customers are concerned about the war in Ukraine”, an AB official said, noting that “we want to ensure we will be able to serve our customers’ needs in the future too.”

Earlier this month, Greece’s Ministry of Rural Development and Food pointed out that Russian and Ukrainian wheat accounts for roughly 30% of the country’s annual import of some 250,000 tonnes.

The government has called on suppliers to declare just what they have stockpiled in terms of supplies such as animal food, fertiliser, flour, grains, and vegetable oils.

Adonis Georgiadis, the Minister of Development and Investment, pointed out earlier this week that “flour and sunflower oil are the two products which, apart from energy, the war has affected more than anything else.”

He warned that these products are in short supply right now across Europe.

Yesterday, Sotiris Anagnostopoulos, Secretary-General for Commerce and Consumer Protection at Greece’s Ministry of Development and Investment, pointed out that because citizens are stocking up, demand for some products has multiplied threefold in recent weeks.

Prime Minister Kyriakos Mitsotakis has called a government meeting for Monday to analyse the situation in Ukraine and the potential shortages that could hit Greece as a result.

In Spain, supermarkets restricted sunflower oil purchases to a few bottles per customer. In Italy, Unicoop Firenze has set limits on flour, sunflower oil, and sugar purchases, while the Eurospin chain is limiting purchases of flour and sunflower oil.