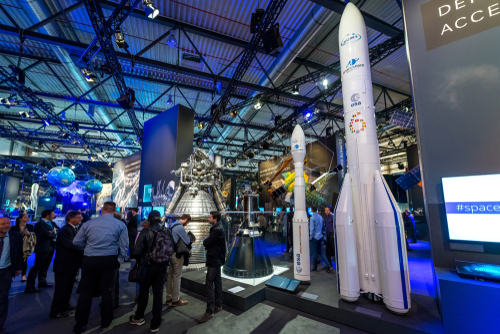 Prague (Brussels Morning) Today, the EU is celebrating the kick-off of the EU Space Programme, during an event hosted by the European Commission (DG DEFIS), the European Union Agency for the Space Programme (EUSPA) and the European Space Agency (ESA). When announcing EUSPA, in December 2020, Commissioner Thierry Breton said that the European space policy will continue to rely on ESA and its “unique technical, engineering and science expertise”.

With the adoption of the EU Space regulation, EUSPA was set to replace the former European Global Navigation Satellite Systems Agency (EU GNSS). With a reinforced mission and a budget of 14.8 billion euro, the revamped space agency was tasked to promote innovation in applications and technologies to unleash the potential of space data and services while positioning the EU as a global leader in digital security and satellite communications. EUSPA is in charge of leading the flagship projects Galileo/EGNOS and the Earth-observation programme Copernicus.

Space is now an integral part of our everyday lives and economy in ways that are quite tangible. We depend on satellite networks for anything from our smartphones to finding our way around a new city. Navigation, communication, and transportation, owe much to our basic curiosity and the fact that we reach for the stars, but depend on the ability we have developed to look down. Space is no longer “out there” but very much down here.

Brussels Morning talks with EUSPA’s, Rodrigo da Costa, in Prague, discussing the agency’s role and how their services can contribute towards situational awareness, disaster-response scenarios, prevention and preparedness, and even in delivering towards the green and digital transitions.

More than ever, space is the final frontier of business development.

BM: What does EUSPA do?

In this sense, we stimulate the use of the services and data provided by EU Space Programme: Galileo, EGNOS, and Copernicus.

We promote the use of EU space services by offering incentives and knowhow to established companies, SMEs, start-ups and innovators.

Concretely, the agency supports applications based on our satellite networks through various funding mechanisms, as well as Research and Development frameworks, such as Horizon Europe but also other innovation competitions and prizes.

Our objective is to ensure that EU companies gain market share in satellite navigation, earth observation, and telecommunications – but most notably, that they create value by developing integrated applications that best respond to the users’ needs.

In our job, we work with industry partners, the European Commission, the European Space Agency, and above all, EU member states to maximise the socio-economic benefits of space exploration for European businesses and societies.

BM: The drive to space was part of the Cold War. Is there not a strong security dimension in what you do? And what is the role of the UK as a partner that is “of us,” but no longer one of us?

RC: Our latest initiative in promoting the role of the EU as a global actor is GOVSTACOM.

That is a programme for the promotion of global secure communications that can be rapidly deployed in the service of government security actors such as police, border guards, firefighters, civilian and military crisis managers. They can assist them in military defence, civil protection, humanitarian aid, emergency response and diplomatic communications.

The programme is currently at its nascent stage. EUSPA is coordinating its development through the procurement of the GOVSATCOM HUBs, and the Horizon 2020 ENTRUSTED project.

The GOVSATCOM HUB is an operational centre that links GOVSATCOM users to the infrastructure, with a view to optimising supply and demand, security and interoperability.

With a view to the future, the project aims at establishing a Network of governmental Users (NoU) of secure SatCom services, define the user requirements, and identify state-of-the-art and emerging technological trends, creating a roadmap for Research and Innovation.

Concerning the participation of the UK, there is applicable law and relevant tender documentation that applies without prejudice to possible future international agreements between the Union and the UK.

BM: The US Space Agency (NASA) is planning to land the first woman and first person of colour on the moon. In this context, it is also leading a regulatory process with the negotiations of the so-called Artemis Accords. When it comes to military-civilian cooperation, what’s the EU stance on the Artemis Accords?

RC: It is not within EUSPA’s scope to initiate direct military-civilian cooperation; however, governmental users can benefit from data and services (Earth Observation and Global Navigation Satellite Systems (GNSS)) deriving from the EU Space Programme components.

For Galileo, for instance, we are providing a Public Regulated Service (PRS). It is an encrypted navigation service for governmental and government-authorised users and sensitive applications that require high continuity. Access to PRS is controlled through operational and technical means, including governmental grade encryption.

BM: What about cooperation with other space agencies (India, China, Russia, US, Japan, UAE, etc)? Is there a sense of cooperation despite the inevitable competition?

RC: EUSPA is the implementing of the European Union Agency Space Programme.  Our role is to define and deliver safe and secure space-based services that contribute to the strategic autonomy of the Union and meet the needs of a broad range of users – the citizens, but also for instance in aviation, maritime, agriculture and geomatics.

Cooperation is indeed important to our activities as we are focusing on users.

Galileo Open Service, for instance, is compatible with the American GPS. Also, we are already cooperating with several non-EU countries to stimulate the market uptake of these services across the globe. For example, through the Horizon 2020-funded GNSS Asia project, we run hackathons and innovation competitions to promote the use of E-GNSS in the Asian market.

Space-based data and services are already very important for the EU today — and this will grow in the future; they contribute to serve EU priorities such as the Green Deal, the Digital Transition, and the increase of the resilience of our economy. Naturally, EU strategic autonomy in space is also a key objective.