by Anna-Karin Friis and Marta Pacheco
in Commission, Features 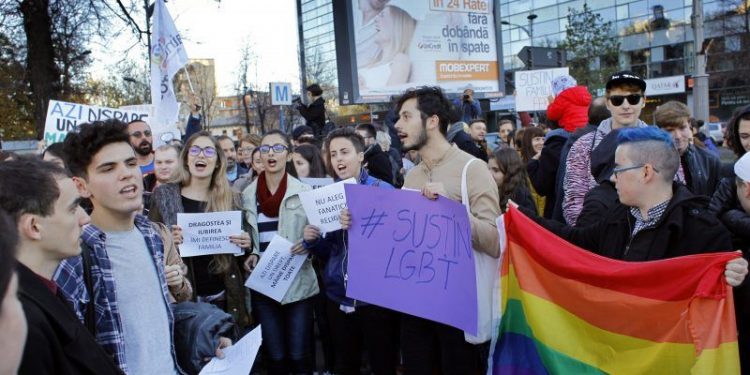 Brussels (Brussels Morning) The EU’s first strategy on LGBTIQ equality calls for homophobic hate speech and hate crime to be labelled as ”EU crimes” and it urges recognition for same-sex couples’ parenthood throughout the EU.

The Commission continuously monitors attitudes towards the LGBTIQ community in EU countries and has promoted acceptance of different sexual expression by funding campaigns over the last decade.

However, for many in the LGBTIQ (lesbian, gay, bisexual, transsexual/transgender, intersexual and queer) community, discrimination is still an everyday reality; the Commission quotes 43% as having expereinced or perceived discrimination in the last few years.

To promote equality, the EU now sets out goals for fighting discrimination against people for reasons of their sexual orientation, gender identity or gender attributes.

Terry Reintke MEP for the Greens and active in the European Parliament’s intergroup on LGBTIQ welcomed the launch of the first ever EU strategy. “The LGBTIQ strategy is being published at a crucial moment, when the community is currently facing repeated attacks in the EU.”

Although social acceptance of LGBTIQ people generally was on the rise in the last five years, according to the Eurobarometer’s survey of discrimination, nine countries show trends that accept equal rights for LGBTIQ people to a lesser degree.

Attitudes towards same-sex marriages were most restrictive in Czech and Hungary, with trends in Bulgaria and Slovakia also indicating that  people are less accepting of equal rights for sexual minorities.

“In Europe, the rights of LGBTIQ people are under threat. Half of all of European LGBTI people say they are still discriminated against, and the acceptance of transgender and intersex people remains very low”, said Kim van Sparrentek, MEP with the Greens.

The EU strategy aims at better legal protection in cases of homophobic hate speech and hate crime and to promote legislation on the mutual recognition of parenthood in cross-border situations. Most family law provisions are nationally determined, posing problems in cases where family rights are recognised in one EU country but not in another.

When the situation involves moving across borders, EU freedoms apply, but where EU member state national law is concerned, the Commission can only monitor the situation. Another issue is that of gender identity, whereby  groups such as trans, non-binary and intersex people are often not recognised in law or in practice.

The European Parliament’s LGBTIQ intergroup is concerned with the situation in Poland and Hungary for the moment. Constitutional changes in Hungary as well as developments in Poland in terms of intolerance and discrimination against LGBTIQ people would require EU action.

However, any legislative changes at the EU level in this domain calls for unanimity, which would be unlikely among EU leaders. Not all countries are willing to make progress.

”Not all EU member states address these issues”, Commissioner Vera Jourová, responsible for values and transparency, stated today in Brussels.

”Some legal aspects could be adopted by enhanced cooperation, by the same countries that show positive attitudes anyway, but some require anonymity.”

Any changes that would imply recognition of LGBTIQ couples’ and rainbow families’ rights at EU level are therefore unlikely, with EU leaders such as Hungary’s Prime Minister Viktor Orban decidedly opposed. However, countries that are willing to make progress can still pick up on the Commission’s recommendation and present their action plans.

The EU also plans to strengthen its engagement on LGBTIQ issues in its external relations. The Commission will press for LGBTIQ equality in the political dialogue and support measures to tackle discrimination.

The equality drive foresees integrating a LGBTIQ perspective into all EU policies as well as in EU funding programmes; humanitarian aid should become increasingly gender sensitive and local civil society organisations working on the frontline to promote and protect LGBTIQ rights will be backed by EU funding.