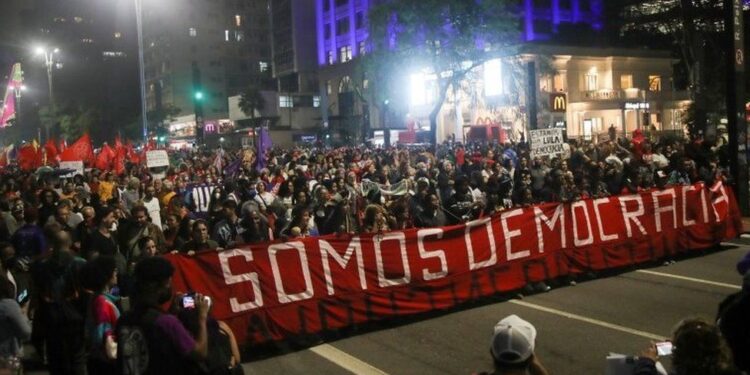 Tens of thousands of people in Brazil have subsequently held pro-democracy rallies, in an angry response to the storming of Congress by ex-President Jair Bolsonaro’s supporters.

The disorder comes a week after President Luiz Inácio Lula da Silva was sworn in after October’s election that divided Brazil.

On Monday evening, the 77-year-old new leader – widely known as Lula – visited the damaged buildings of Congress, the presidential palace, and the Supreme Court together with the country’s governors, condemning the “terrorist acts” and vowing to punish the perpetrators.

The Left group in the European Parliament issued a statement reading, “Through recent elections, the people of Brazil have expressed a clear desire to end the dark years of the Bolsonaro government and his policies of racism, attacks on women’s rights, and environmental destruction. They voted for a progressive government under Luiz Inácio Lula da Silva, who has the mandate to govern in the interests of the country’s working people. A violent minority cannot be allowed to stop this.

“All over the world, we are seeing now how far-right forces refuse to recognize election results they don’t like. The far-right has shown again and again its incompatibility with democratic values.

“We express our solidarity with President Lula and his government, as well as with the people of Brazil.

“We express our satisfaction concerning the clear condemnation of this attempted coup expressed by EU leaders and call on the High Representative for Foreign Affairs to continue to defend the will of the people of Brazil,” it ended.

Further comment comes from Spanish Left MEP Manu Pineda who said, “Behind this coup attempt in Brazil there are the same values, ideas, and actors who staged the coup against Zelaya, against Evo, against Lugo, the soft coup against Dilma, the attempted coup against Correa, the attempted assassination of Cristina Kirchner, the pantomime of the presidency in charge of Guaidó or the imprisonment of Castillo.

“The same far-right groups that are incompatible with democracy, that are trying to stop the undoubted advance of the left in Latin America through lawfare and political violence.”

On Monday morning, heavily armed officers started dismantling a camp of Mr. Bolsonaro’s supporters in Brasília – one of a number that has been set up outside army barracks around the country since the tightly-fought presidential election

Bolsonaro, 67, has not admitted defeat in the tightly-fought election and flew to the US before the handover on 1 January. On Monday, he was admitted to a hospital in Florida with abdominal pain.