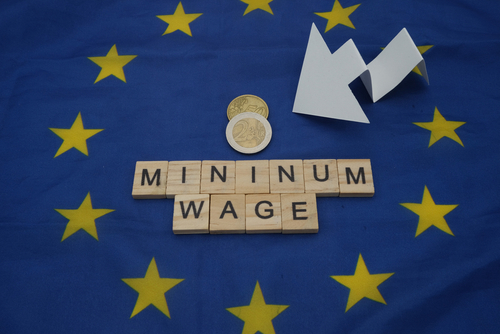 Some coins, next to a white arrow and a wooden inscription, minimum wage, above a flag of the European Union.

After the draft directive is adopted, it will help to secure decent living and working conditions for employees in the EU, the Council stressed in a press release on Tuesday.

“The directive establishes procedures for the adequacy of statutory minimum wages, promotes collective bargaining on wage setting and enhances the effective access to minimum wage protection for those workers who are entitled to a minimum wage under national law,” the body pointed out.

According to EU rules, member states that have statutory minimum wages have to implement mechanisms for setting up and updating their minimum wages.

The Council and the EP agreed that these updates should take place biennially or at least once in four years in countries that have automatic indexation mechanisms.

In addition, social partners must be involved in the process of updating and setting statutory minimum wages, the Council pointed out.

The Council stressed that EU member states should strengthen the role of social partners and protect workers’ representatives to help them engage in collective bargaining.

It added that bloc members where collective bargaining coverage rate is below 80% should adopt action plans to promote collective agreements with the aim of increasing the rate of coverage.

“Council and EP also agreed on a number of measures to enhance the effective access of workers to minimum wage protection,” the statement notes and adds “these measures include controls by labour inspectorates, easily accessible information on minimum wage protection and developing the capability of enforcement authorities to go after non-compliant employers.”

The Council reminded that the European Commission sent the proposal to it and the EP in 2020 and added that eight negotiation rounds took place between the EP and the Council in the period since January.

It concluded that the Committee of Permanent Representatives still has to approve the latest agreement with the EP, after which the Council and the EP are to hold formal votes.