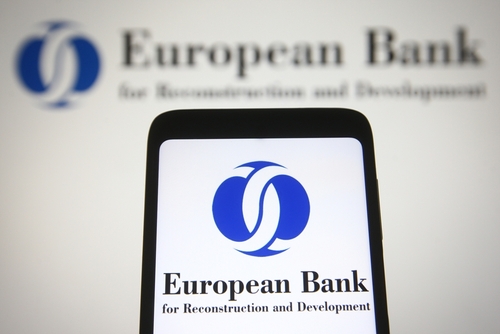 KYIV, UKRAINE - NOVEMBER 04, 2021: In this photo illustration European Bank for Reconstruction and Development (EBRD) logo is seen on a mobile phone screen.

Belgium, (Brussels Morning Newspaper) The European Bank for Reconstruction and Development (EBRD) warned about the negative effects of coronavirus crisis measures on Tuesday.

The bank called on governments to rethink their aid measures aimed at helping companies weather the crisis, pointing out that such measures prop up “zombie companies,” according to Reuters reporting.

The EBRD stressed that aid measures can keep zombie companies afloat, which has negative effects on healthy parts of the economy.

The bank noted that corporate debt has reached record-high levels in the 40 or so countries it operates in, while defaults have reached record lows in many countries.

It warned that some companies take advantage of government aid in the form of cheap loans, which helps them to stay afloat, but stressed that maintaining this level of support is not sustainable as interest rates are on the rise.

“We still haven’t seen the fallout from the pandemic and the war in terms of bankruptcies… actually, bankruptcies in the new EU member states are down,” noted EBRD chief economist Beata Javorcik.

“There is a risk of zombification if emergency measures from governments are extended for much longer,” she warned and pointed out that keeping such companies afloat has negative effects on healthy companies as they see lower employment, investment and revenue.

The EBRD noted that many countries temporarily suspended the obligation to file for insolvency while providing subsidized loans to companies in the red. Coupled with temporary payment deferrals, solvency injections, and emergency grants, coronavirus crisis measures helped to prop up zombie companies.

The bank warned that emergency measures should be rolled back gradually to avoid shocks and be “fine-tuned to ensure that only solvent and viable firms with temporary liquidity problems receive financial assistance.”

According to the EBRD, the problem is more pronounced in economies with more government-run banks and companies. The bank pointed out that 13% of state-run businesses in its study fell into the category of zombie companies, in contrast with 9% of privately-owned businesses.

The EBRD concluded that “governance scores have deteriorated in many economies in the EBRD regions, driven mainly by the perceived worsening of corruption and a reduction in the freedom of the press.”