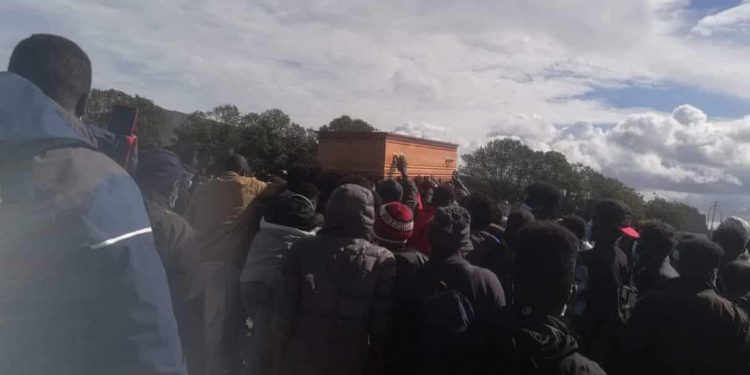 A Sudanese migrant who drowned while attempting to cross the Channel from France to England has been buried in Calais after coronavirus restrictions meant it would have taken three months for his body to be repatriated to Sudan.

More than 150 fellow Sudanese attended Abdulfatah Hamdallah’s funeral in Calais on Monday morning, according to his cousin.

His brother, Al-Fatih Hamdallah, who is now living in Libya, said he had got permission from his father in Sudan “to let the people in France bury him in France in the Muslim tradition and at a Muslim cemetery”.

Hamdallah’s cousin, Al-Noor Mohamed, 16, said: “The French police told us that it will take up to three months to take the body back to Sudan due to the coronavirus lockdown measures, so with his family we decided to bury him with Muslims in France.”

He was buried in a brown wooden coffin with his pallbearers all wearing face masks distributed to them by a Catholic charity operating at the camp to help the refugees.

After his burial, dozens gathered at the office of the charity that helped to pay for his burial to read the Qur’an, a Muslim tradition at funerals.

“He used to be our friend, and we only did our duty to take him to the cemetery,” said Rahma Hamid, 17, a Sudanese refugee who has been living in Calais for more than a month and wants to go to the UK.

Al-Hadi Hamad, 19, who attended the funeral, said: “I had known him for two to three months here. He told us that he was going to try and cross to the UK. He also told us that he doesn’t know how to swim, but still he wanted to go.”