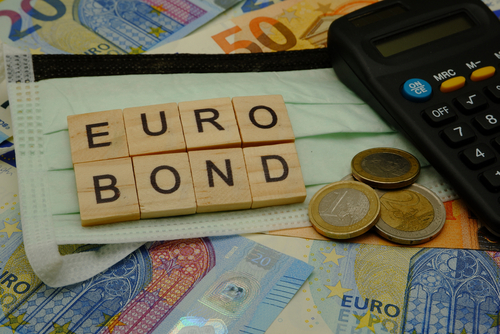 Some euro banknotes and coins with a calculator and an inscription,eurobond,with a face mask. European bank concept

Brussels (Brussels Morning) The EU sold 20 billion euro worth of 10-year bonds on Tuesday to back its COVID-19 recovery fund, with the yield on the bonds dipping on Wednesday.

Demand for the bonds reached roughly 142 billion euro, with yield dropping from 0.086% at pricing to 0.035% on Wednesday, according to Reuters.

Tuesday’s bond sale was the largest single-tranche, institutional borrowing and marks the start of the EU’s borrowing spree. The bloc is to issue up to 800 billion euro worth of bonds until the end of 2026 to finance its COVID-19 recovery fund.

Wednesday’s yield dip combined with the strong demand indicates that the market easily absorbed the tranche.

“Even we are a little surprised that it’s managed to perform that well that quickly, given the size” of the tranche, one banker involved in the sale noted.

Clearly, the banker pointed out, the recent drop of yield on EU debt had appealed to investors. As a result, the funding programme would likely become significantly more solvent compared to the Support to mitigate Unemployment Risks in an Emergency (SURE), the banker added.

The European Central Bank (ECB) has decided to maintain accelerated bond purchases and low interest rates through the third quarter this year, which gave investors more confidence to buy the bonds.

Bond yields have dropped on both sides of the Atlantic in recent weeks and the Fed is expected to set a date for the start of talks on easing bond purchases, with investors looking at new economic projections and interest rates to see how the views of policymakers have changed since the first quarter this year.

According to the AllianceBernstein asset management firm’s portfolio manager, Nick Sanders, US yields would probably be “the main driver” in indicating the “direction of European yields over the coming three months”. For this reason, he suggested, “the Fed rhetoric on tapering and where their inflation targets are will be of interest”.