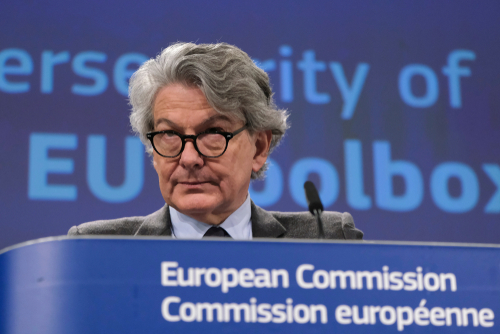 Brussels (Brussels Morning) The European Commissioner for Internal Market, Thierry Breton, issued a call for industrial expansion when addressing a conference on Thursday.

He stressed that global supply chain disruptions and the resulting shortages and price hikes attested to the importance of self-sufficiency, and claimed that some countries are using the EU’s dependency on fossil fuel imports for geopolitical leverage.

According to a press release, Breton also cited the EU’s “dependences on raw materials that are critical for the transition of our industry, such as lithium or synthetic graphite, which are so important for the production of electric batteries.”

He pointed out that timber prices had increased by more than 25% in just one year and the impact that had on the civil engineering sector.

In order for the EU economy to become more resilient, he maintained that the bloc would have to invest in new technologies and products if it is to remain competitive and create quality jobs.

The EU should invest in industrial expansion to “conquer world markets and export” as well as “shelter all its supplies from the hazards of what I call the geopolitics of value chains”, Breton declared

He reminded his audience that the EC has been pushing for expansion of battery production, IT infrastructure, chip production and investments in hydrogen and raw materials. EU investments in batteries reached 120 billion euro in 2019 and 2020, with 70 large battery projects announced and launched in the bloc.

The EC is preparing new regulations for hydrogen technologies and investing roughly 800 million euros annually in the sector, Breton noted, adding that IT companies within the bloc are developing new data processing technologies.

He went on to commend public authorities and industry “for their joint commitment to these industrial alliances”, which, he promised “we will continue to promote.”

Breton also declared that it was essential “to strengthen standardisation governance in Europe, to prevent major industrial players from exerting excessive influence on the development of European standards.” Proposals in support of this were likely within a matter of weeks, he said.

“It is time to have a discussion, without naivety, and without taboos, on the toolbox, we need to guarantee our security of supply for our most critical value chains in case of crisis,” he concluded.