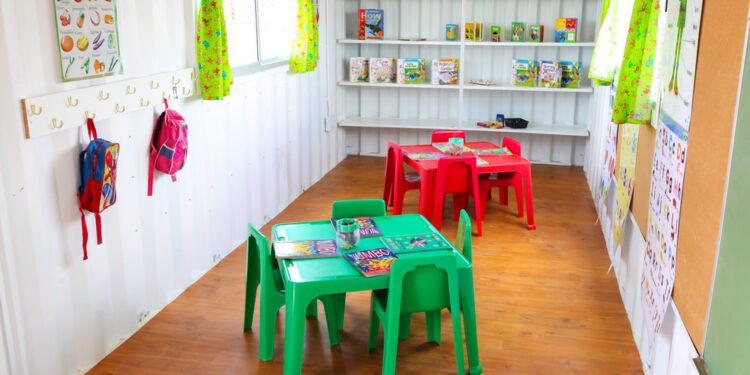 Brussels, (Brussels Morning)- Now that their children can only go to their regular crèche for one in three weeks, a dozen Brussels parents will set up childcare for their offspring next week. Partly out of necessity, partly out of protest. “Why isn’t what can be done here in Wallonia and most European countries?”, one of the initiators Thomas Schoenaerts wonders.

Schoenaerts has been sending his children to De Zinnekes in Laken for a year and a half. “The crèche really does its best to guarantee the continuity of the reception with the resources they have,” says the Brussels resident, to the BRUZZ reporter.

“But it is frustrating to see them suffer, toil and try in vain. No wonder that supervisors and carers drop out or choose another job.”

Many childcare initiatives have been looking for employees for months. Figures requested by Flemish MP Hannelore Goeman (Vooruit) show that more than 40 vacancies that were distributed in Brussels last year in the childcare sector with Dutch as the contact language have been closed without filling, while there are still 26 vacancies.

Why are you ringing the alarm now?

“I can only send my youngest child to daycare for one in three weeks. Then you know something is seriously wrong. We are presented with a fait accompli and receive no support.”

“I have seen the quality of childcare crumble with regret. You could also pay for less: eight to nine children per supervisor, that is far too much. In Wallonia, that figure is six, the European average. Something urgently needs to be done about it. that standard. Children do not receive the care they deserve and the complaints of people in the sector are apparently not listened to enough.”

“We have to figure that out ourselves. We are a mixed bag of civil servants, lawyers, architects, a director, … There will certainly be some improvisation involved.”

“We are rowing with what we have. In any case, information sheets have already been drawn up for each child, with their possible allergies, eating habits, or advice about what we do best when they start to cry. It is also a bit of the intention to feel for yourself what the job of the supervisors looks like, out of solidarity with their situation in this crisis.”

Next Wednesday you will move to the cabinet of Flemish Minister of Welfare Hilde Crevits (cd&v).

“We are going to organise our crèche there between 9 and 11 am. The intention is to put the minister’s nose on the facts. There are many parents who are in our situation. This is not just a Brussels problem.”

Which measures do you think are the most pressing to tackle the problems in childcare?

“It goes without saying that the child standard must be lowered and that more guidance should of course be aimed at. In addition, efforts should also be made to upgrade the profession. Students who are actually preparing for a job in the crèche, too often drop out during their internship.”

“Also try, in the short term, to provide a scenario for parents: how can we support child care? It is also a pity that there are rooms available in our children’s child care that we are not allowed to use now, for insurance reasons.”

What do you hear from child counsellors or other parents?

“They see colleagues and parents leaving with their children. The ship is sinking and that is sad to see. We are well aware that they are understaffed and also want to say clearly, ‘Thank you for your concern, this is not your fault.’ The water is up to these people’s lips. We want to support them, we want to contribute to better working conditions for these people.”

“Last week I saw a report by VRT NWS in our permanent crèche in Laeken. There a supervisor was standing alone for a group of 15 children. That is simply unsafe and inhumane. Childcare must urgently be placed at the top of the Flemish government’s agenda. because it is five past twelve.”