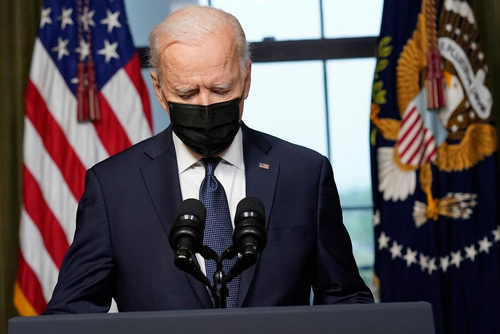 The USA, (Brussels Morning Newspaper) Russia’s war on Ukraine has been covered by the media, for good reason, as an enormously important event that may very well reshape geopolitics, the world’s economy and globalism itself. All of that is true, but the American people still don’t see it that way and remain more concerned about issues that effect them directly and every day rather than a faraway war. A recent poll showed that 30% of Americans view inflation as the top problem facing the country. Fewer than half that number think the war is the most important issue. This reality has been very unhelpful for President Biden who has reoriented his presidency to focus primarily on the war.

Biden undoubtedly sees that orientation as necessary-and he may be right, but it could come at a dramatic cost to him and the Democratic Party. Since the war began, Biden has acted like a wartime president-spending much of his State of the Union speech discussing the war, flying to Europe to meet with and support allies, helping to build a multi-national sanctions regime against Russia, pushing funding through Congress to support Ukraine and building support among the American for his position. Despite Biden doing all these things, for the American people the war remains very far away while the gas station and grocery store are right around the corner.

The problem Biden faces is that unless he can address the domestic problem that are of primary concern to the American people his ability to function effectively as president will be weakened significantly. Although the problems of inflation and supply chains are not Biden’s fault, it is the core nature of American democracy that voters are very likely to hold the incumbent president and his party responsible for those problems. Therefore, it is absolutely essential that Biden and his party recognize the reality of what inflation means to many Americans and take steps to address it. Failing to do this will lead to political problems that will make it more difficult to support Ukraine in this war.

The connection between Biden’s domestic political fortunes and the US role in supporting Ukraine may not be obvious, but it is very real. The GOP remains torn between a more conventional faction that largely supports Biden’s position on Ukraine and a faction more aligned with Donald Trump that lean more towards Putin. Clearly, empowering anybody from that faction would be bad for Ukraine and for Biden’s efforts, but if the GOP wins back control of one or both houses of Congress, that will be inevitable. Similarly, a Republican controlled Congress will spend much of its time on pointless and groundless investigations and political harassment of the administration. That will also be a very significant distraction that will demand time and focus from the White House and ultimately help Putin.

This means that Biden will have to begin to focus more on a domestic political agenda that has been stalled since the early months of his presidency. Since the war began, there has been almost no discussion of trying to pass Biden’s major domestic policy bill known as Build Back Better. Biden could not do this in the fall, but there was some talk of trying to break the bill into component parts and passing some of it that way, but there is no indication that plan is moving forward. Similarly, the child tax credit which helped a lot of lower income people in 2021 has expired. In Biden’s State of the Union address, the President revisited some elements of his domestic political agenda, but there is little reason to think any of that is moving forward either.

It is not difficult to understand why Biden has moved his focus away from his domestic agenda. First, the war in Ukraine is a major international crisis that requires the President’s immediate and sustained as he must work to keep the sanctions coalition together and find ways to support Ukraine while avoiding greater escalation. The war also represents a much more interesting and even dramatic aspect of the presidency. Speaking to world leaders, using American influence and power to try to stop a genuinely destructive actor like Vladimir Putin and closely a war as it unfolds is much more interesting that bickering with powerful senators like Joe Manchin or Kyrsten Sinema. However, if Biden does not get back to that bickering, his presidency could be in trouble.

Reducing inflation, particularly in the face of disruptions caused by both the war in Ukraine and the seemingly never-ending Covid pandemic, is not easy, but there are some things the President can try to do. Restoring the child tax credit is one example, but programs that seek to get money into the hands of lower income Americans struggling to afford necessities like gas and groceries would be extremely helpful as well. It is axiomatic that passing these types of programs through Congress, particularly as Manchin and Sinema give the GOP an all but de facto majority in the Senate, will be very difficult. However, Biden must try to do this and position himself on the side of the American consumer. From a political perspective, trying and failing to pass legislation is much better than seeming to not be aware of the problem.

The best way for the US to help Ukraine is to have a functioning Biden administration-and preventing that is the primary goal of the GOP. Therefore, doing the domestic and policy work must be at the center of Biden’s efforts to support Ukraine in this war.

Tags: Main-SliderRussia’s war on Ukraine has been covered by the media