Belarus crisis: EU says it does not recognise election results 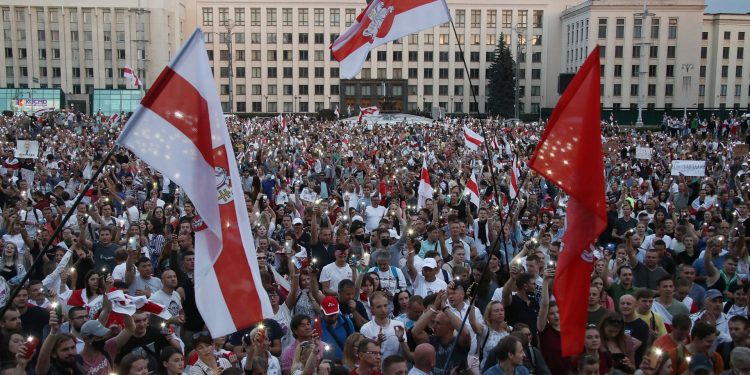 The EU has said it does not recognise Alexander Lukashenko as Belarus’s president and vowed to press ahead with sanctions on his regime, following an emergency summit in response to 10 days of protests that have shaken the autocrat’s 26-year grip on power.

“The European Union stands in solidarity with the people of Belarus,” said Charles Michel, the European council president, who convened the last-minute meeting of the EU’s 27 leaders. Belarus’s presidential elections had been “neither free nor fair and did not meet international standards”, he said. “We don’t recognise the results presented by the Belarus authorities.”

Angela Merkel said: “The people in Belarus know what they want … that’s why we want an independent path for Belarus where the political conditions are decided by the country itself.”

The German chancellor also revealed that Lukashenko had rejected a phone call with her. Expressing regret, Merkel said: “You can only mediate when you are in touch with all sides.”

The Belarusian defence ministry on Wednesday ordered an increased military presence on the borders with Poland and Lithuania. Lukashenko also ordered the ministry of the interior “not to allow further unrest” in Minsk. Riot police returned to the streets of the capital, after several days in which they had let protesters rally unmolested, in a sign that the protest momentum that culminated in a huge rally on Sunday has been halted, at least temporarily.

In the run-up to the meeting on Wednesday, the Belarusian opposition leader, Svetlana Tikhanovskaya, urged the EU not to recognise Lukashenko as president.

“I call on you not to recognise these fraudulent elections,” she said. “Mr Lukashenko has lost all the legitimacy in the eyes of our nation and the world.”

Meeting via video link, EU leaders endorsed a plan to sanction Belarusian officials who ran the disputed elections that resulted in an improbable landslide for Lukashenko, as well as those responsible for the violent political crackdown.

Lukashenko claimed victory in presidential elections 11 days ago after official results gave him 80% of the vote, with 10% to Tikhanovskaya.

But the EU stopped short of demanding new elections, while stepping up calls for an “inclusive national dialogue”.

The European commission president, Ursula von der Leyen, who has pledged to lead a “geopolitical” administration, responded: “We support the Belarusian people in choosing the path they want to go down. It’s their decision.”

Brussels also pledged €53m (£48m) for Belarus, mostly to help hospitals and small businesses deal with coronavirus, which Lukashenko once dismissed as “psychosis”, as part of a pandemic response that helped fuel dissatisfaction with his regime. Some €2m would go to victims of political repression, with €1m earmarked for civil society and independent media.

The EU has also called for “a full and transparent investigation” into violent repression of peaceful protesters.

But the bloc’s leverage is unclear and leaders sidestepped calls to deliver an explicit warning against Russian meddling, after Lukashenko called Vladimir Putin for help at the weekend.

On Tuesday, Merkel and the French president, Emmanuel Macron, spoke to the Russian president in separate phone calls. They set out their expectations that Lukashenko would refrain from violence, release political prisoners and open dialogue with the opposition. In both calls Putin spoke against “outside interference” in Belarus, according to Kremlin readouts.

Michel also spoke to the Russian leader and told journalists on Wednesday they had had “a clear and frank exchange of views” about Belarus. “The future of Belarus has to be decided by the people in Belarus, not in Brussels, not in Moscow.” Citing recent Kremlin statements, Michel said the Russian government didn’t intend any military intervention in Belarus.

An EU official said the two men had “discussed the best ways to encourage/assist intra-Belarusian dialogue for a peaceful end to the crisis”, adding that one option was dialogue through the Organization for Security and Cooperation in Europe.

The OSCE counts EU member states as well as Belarus and Russia among its members, but was denied access to monitor last week’s presidential elections.

On Wednesday, senior Russian officials called on western leaders not to interfere in Belarus, with Sergei Lavrov, the foreign minister, accusing several EU states of launching a “struggle for the post-Soviet space”.

The remarks appeared to reflect a growing sense that Lukashenko may survive the largest protests of his 26 years in power.

Moscow had adopted a “wait-and-see” approach, analysts of the Kremlin told the Guardian, but it would like Lukashenko to limp through the crisis if it left him susceptible to further Russian pressure for integration.

Without directly mentioning Lukashenko, a Kremlin spokesman decried western pressure against him, saying it was “unacceptable”.

Russia has largely held back from providing direct aid to Lukashenko, in public at least. But Putin and Lukashenko have spoken three times since Saturday and there are signs of other high-level contact. A Tupolev Tu-214 jet previously used by the head of Russia’s FSB intelligence service flew to Minsk on Tuesday night and returned hours later. Peskov said he had no information on the plane.

Russia has not sent military aid to Belarus under a military treaty, Peskov said, and added: “There’s no such need at the moment, and actually, the Belarusian leadership has admitted the absence of such necessity.”

In remarks to Russian state television, Lavrov accused Poland, Lithuania, Estonia, and the EU parliament of attempting to meddle in Belarus.

“No one is hiding that this is about geopolitics, about the struggle for the post-Soviet space,” he said. “We have seen this struggle in previous stages after the Soviet Union ceased its existence. The last example, of course, was Ukraine.”

He also accused protesters of provoking riot police, who fell on them with rubber bullets and stun grenades in a rout covered even on Russian television. “We see how they tried to provoke riot police,” Lavrov said, referring to video materials and posts on social networks.

He did criticised the 9 August elections, in which Lukashenko was accused of massive vote-rigging, saying they were “not ideal”. But he added that the government was ready to talk to the opposition. “I don’t see a lack of readiness from the government for dialogue,” he said.

So far Lukashenko has refused all offers to talk with the opposition. “He is desperately looking for the way out, not for the country but for himself,” Lithuania’s foreign minister, Linas Linkevičius, said. Lukashenko needed to be involved in any talks, he added.

“We have to talk to everyone who is in possession of some leverage [including] those who are de-facto controlling power structures,” he said.

Speaking on Monday, Linkevičius said he had spoken to Tikhanovskaya, who was ready “to be very active in the political life of Belarus”. The opposition candidate, who fled to Lithuania after an apparent threat to her children, was initially “very depressed”, the foreign minister said. “But now she is in a good mood and she is ready to take action to take part.”

The first meeting of a co-ordination council, set up by Tikhanovskaya’s representatives and meant to oversee the transition of power, took place in Minsk on Wednesday. It elected a seven-person presidium, including opposition politicians, a well-known theatre director, a worker’s representative from the Minsk Tractor Factory and the Nobel prize-winning author Svetlana Alexievich. On Tuesday, Lukashenko said he would take “adequate measures” against those involved.