Bart Cannaerts is the Cyclops: ‘Vodka after every performance!’ 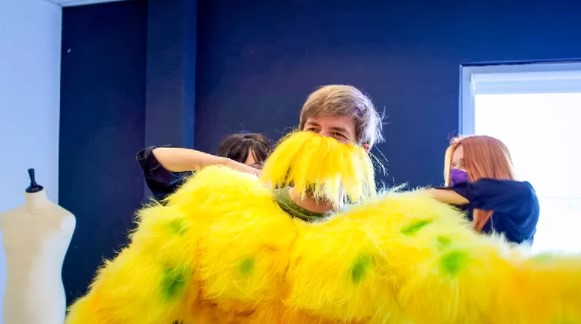 Belgium, (Brussels Morning Newspaper) His name was not mentioned once by the detectives of ‘The Masked Singer’, but among amateur detectives on the internet, it was a foregone conclusion: comedian Bart Cannaerts was the man in Cyclops’ suit. Yet someone on YouTube honked: ‘Wrong! It’s Vincent Kompany!’

Bart Cannaerts «Vincent Kompany! That’s really cool. I thought it was really cool that the investigators didn’t recognize me at all, so I kept hoping for a while that the viewers wouldn’t immediately notice. But my family immediately knew 2 million percent for sure (laughs).

“I kept insisting to everyone that it wasn’t me because I was contractually obliged to do so. A heartfelt apology to all involved!”

HUMO Have you doubted your participation for a long time?

CANNAERTS «For the first season I was asked to be on the detective team. Then I said no, also because I didn’t understand the concept at all. The funny thing is, once I started watching, I couldn’t stop. It all makes no sense, it looks super silly – and yet you keep wanting to know how it goes next.

HUMO And so you became Cyclops.

CANNAERTS «It was a bit of a shock when I first saw him – I had predicted that I would be a squirrel, or a Kinder Bueno. But soon I was happy with that funny and somewhat creepy figure.”

HUMO What was more exciting: replacing Erik Van Looy in ‘The smartest person in the world’, as you did at the end of last year, or participating in ‘The Masked Singer’?

CANNAERTS «That last one. I was in a blind panic from the first second to the last note. Suddenly I had to sing in English, I was constantly afraid of forgetting my lyrics, there is that competitive element, and in my suit I could hardly see anything – all the time I was in danger of tumbling off the stage. And it was so damn hot!”

HUMO The Cyclops suit indeed looked like a heater.

CANNAERTS «It was horrible. We once put a thermometer in it: that thing read more than 50 degrees! The space in the head was also small, so that all the fresh air was used up in no time.”

HUMO Didn’t the suit start to smell too?

CANNAERTS «The styling people had a trick for that: vodka was poured over the suit after every performance. That removed the stench without leaving an odor itself.”

HUMO Of course you have already seen the other candidates. What’s in store for us?

CANNAERTS «For almost a year I have had to keep it a secret that I now know some famous people personally. Then you hear someone’s name in a conversation with friends, but you are not allowed to reveal anything.

»I can say this: with a number of costumes the viewers are still completely wrong. One suit contains a really well-known name, but I haven’t heard it mentioned anywhere yet. So keep watching!»